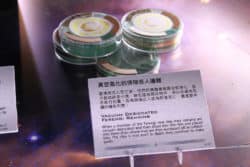 Here’s a story which should sound familiar to Star Trek fans.

The Guardian reports that Truman Capote’s mortal remains were sold at auction this week:

The ashes of In Cold Blood and Breakfast at Tiffany’s author Truman Capote have been sold at auction in Los Angeles for $43,750 (£33,800).

Kept in a carved Japanese wooden box, the ashes belonged to the late Joanne Carson, wife of the former Tonight Show host Johnny Carson. According to vendor Julien’s Auctions, Carson, who died last year, said that owning the ashes “brought her great comfort”. She and Capote were good friends, and the celebrated writer died of liver disease at her mansion in Bel-Air in 1984, at the age of 59.

Along with his ashes, the clothes Capote was wearing at the time of his death were sold for $6,400 and two lots of his prescription pill bottles went for a combined $9,280.

The SF tv show Star Trek: Deep Space Nine introduced or reinterpreted many alien species during its seven-year run in the 1990s. One of those species, the Ferengi, were ultra-capitalists with the most ridiculous funeral ritual DS9‘s creators could think of: after someone died, their remains were sold as collectibles. (Click on the lead photo for an explanation, and a show prop.)

P.S. Did this story remind anyone else of a certain scene in The Addams Family?