About four years ago HarperCollins released a version of The Song of Fire and Ice in the Kindle Store which added audio and video. That edition is no longer available, but today Penguin has released a new edition of the ebook, this time as an iBooks exclusive. 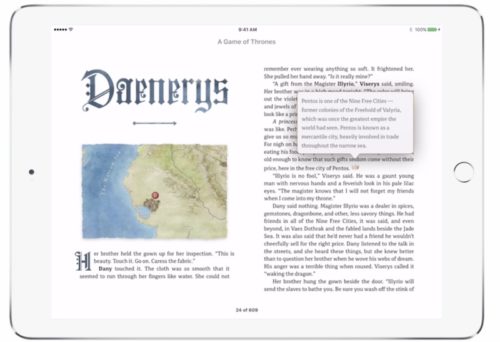 “We’re now entering a new period in the history of publishing,” Martin is quoted as saying in the press release. “The digital book gives readers the ability to experience all this rich secondary material that had not been possible before. These enhanced editions, available only on iBooks, include sigils and family trees and glossaries. Anything that confuses you, anything you want to know more about, it’s right there at your fingertips. It’s an amazing next step in the world of books.”

Enhanced editions of the later novels in the series will be released in the coming months. At present, A Clash of Kings will hit iBooks on 27 October, A Storm of Swords on 15 December, and A Feast for Crows and A Dance of Dragons in February and March 2017.

HarperCollins is only the latest publisher to take advantage of features exclusive to iBooks. Last October Pottermore published enhanced editions of the Harry Potter series in iBooks.

They had little content which was new or improved over the original text, and were not worth buying; let’s hope the enhanced Game of Thrones ebooks are better.

iBooks via Cult of Mac