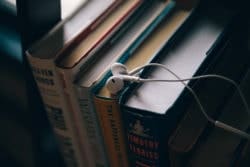 Some fool reported a few days back that the UK was resisting the audiobook revolution, but in reality readers in the UK have adopted audiobooks at about the same rate as in the US.

A new survey from YouGov reveals disappointing stats about audiobook use in the UK if you look at the data wrong, but when we consider all of the stats in context we begin to see a much more rosy picture.

For example, the announcement for the survey report mentions high resistance to audiobooks, with only 10% saying that it is the equivalent, and 5% saying audiobooks are better (and 55% against). That does look like strong resistance, but then we go read the actual survey report where it says that 30% of respondents did not know whether listening to an audio version of a book to be the equivalent of having visually read that book.

Yes, around a third of the respondents didn’t know enough to answer the question. That’s not resistance; it’s a potential market which is currently uninformed.

That 15% is not very specific but it’s still an important piece of data because of how it compares to a recent survey here in the US.

Pew released a new survey report a couple months back which showed that 14% of Americans had listened to an audiobook in the past year.

We can’t cleanly compare the two stats, but the similarity is enough to invalidate the negative spin.

If the UK is resisting the audiobook revolution, then so is the US. And as we know from AAP’s Statshot report, which have shown consistent audiobook sales growth year after year, the latter simply isn’t happening.

If anything, I am surprised that audiobook adoption is so high in the UK.

The Yougov survey brought to mind a post last year by Charlie Stross where he explained why his books weren’t available in the UK as audiobooks.

The tl;dr version is that the blind adherence to territorial rights is denying UK consumers the chance to buy the audiobook. Each book is sold by territory, with a publisher frequently buying print, digital, and audio rights for that territory.

That publisher then has to produce each edition and get it to market so that they can recoup their cost.

Here’s the problem: The audiobook production costs are too high given the size of the UK market, and licensing the American version of the audiobook is uneconomical for a UK publisher:

Q: “Okay, but I can cope with American accents: why won’t your UK publisher license the US audio files?”

A: I asked about this. As of 2012, the official answer was, “we’d love to! But the owner of the US audio files wants a licensing fee for them so large that it would exceed our anticipated sales.”

(This is one of the two rays of hope in the gloomy picture, because it could change overnight—if someone at Audible was to take a realistic view of the likely revenue from a midlist UK audiobook.)

One would think that the limited selection would stymy adoption, but it appears that it is not having any effect.