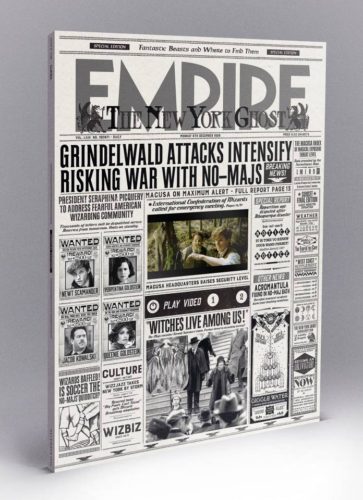 The latest Harry Potter movie is now in theaters, and Empire magazine is marking the occasion by selling its cover to Warner Brothers.

The latest edition of Empire comes with a special edition which features an embedded video player.

The cover of the latest issue of Empire magazine, a British title covering all things movie-related, is still pretty cool. The special issue of the magazine, preceding the premiere of the new Harry Potter spinoff, “Fantastic Beasts and Where to Find Them,” features digital video players embedded in the cover of the print edition.

Video players integrated into a mock front page of The New York Ghost, a wizard newspaper from the Potter universe, allow readers to watch a trailer promoting the movie and a short behind-the-scenes feature. Readers can turn the video on and off with buttons on the cover. A USB port allows them to recharge the video players when their batteries run low.

Empire distributed 5,000 copies of the limited-edition magazine to newsstands at British retail chain Sainsbury’s, with a cover price of £9.99 (or around $12.15). All the other copies of the UK edition have a standard non-interactive cover showing the stars of the movie.

Pottermore is describing this as “new ground-breaking technology”, but it really isn’t the first time someone has crafted a digital magazine cover.

Earlier this year, Forbes experimented with a video player in an ad in the print magazine for its annual “Special Issue on Global Game Changers” in the May issue. And last year, Chevrolet included video players in print ads appearing in select copies of Esquire and Popular Mechanics.

In 2012, Entertainment Weekly embedded the guts of an actual smartphone in its cover and used it to display video and live tweets.

And of course back in 2008 Esquire amazed everyone with that famous E-ink cover (I think I still have one, actually).