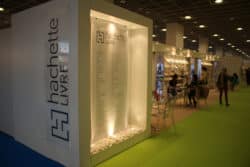 Lagardère released its third-quarter financial report on Thursday. The data on Lagardère Publishing, which includes Hachette, was less than specific as to ebook sales but if we crunch the provided numbers then they reveal that ebook sales continue to decline.

You can find the quarterly report here (PDF), and here are the slides to the investor presentation (PDF).

Here’s what the report said about the publishing division:

In France (up 7.8%), the high level of activity was mostly driven by curricular reform (primarily secondary school level) and by the growth of Illustrated Books, thanks to the success of the different editions of Simplissime by Jean-François Mallet. This performance has been achieved despite an unfavourable comparison effect in General Literature, due to a less unreached release schedule.

In the United States, activity is up significantly (by 12.9%), thanks to the positive impact of a stronger release schedule, with the success of Two by Two by Nicholas Sparks and A Woman of God by James Patterson.

In the United Kingdom, business climbed substantially (up 30.1%), driven partly by the successful release of Harry Potter and the Cursed Child and partly by the solid performance of Education, especially at the secondary school level.

Business fell in the Spanish/Latin American region (down 8.4%), due to early orders for the school books season in the first half of this year.

Partworks’ performance was stable (up 0.4%).

Crunching the quarterly revenue and the percentages in the last paragraph informs us that Hachette earned 45.9 million euros in ebook revenue last quarter, down from 47.51 million euros in the same period last year.

Edit: These figures are given in euros, not dollars. My error.

Given that Hachette brought back agency pricing in order to kill ebook sales, such a small decline indicates that Hachette is failing in its objective.

Clearly they will have to raise prices again.