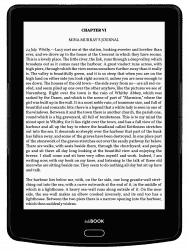 This ereader from the Polish ereader firm ArtaTech which, aside from running Android, runs a distant second to the Kindle Paperwhite.

The InkBook Prime has a simple design with a single button below the screen, page turn buttons, and an unusually contoured back. It has a 6″ Carta E-ink screen with frontlight and capacitive touchscreen.

The screen resolution is an unsatisfying 1024 x 758, but this ereader makes up for that with what is under the hood.

According to the spec list, the Inkbook Prime runs Android 4.2 on a quad-core 1.6GHz CPU with 512MB RAM. It has 8GB of storage, and a microSD card slot. When it comes to connectivity it has both Wifi and Bluetooth.

There’s no mention of Google Play in the listing, but it does say that you can install apps, which is a plus.

This ereader launched at the Frankfurt Book Fair last month, and is currently available from ArtaTech for 139 euros.

All in all this is not a great ereader for the price but it’s also not a bad one.

The screen resolution could be higher, but the real concern for this ereader is the limited amount of RAM and the unnamed CPU.  The RAM and CPU could limit performance to the point that the InkBook Prime is too frustrating to use.

But we will have to wait for user reviews before we know for sure.

Edit: Or perhaps not. I  just found the hands-on video Lesen.net shot last month at the FBF. The demo unit came with a number of reading apps, and performed well.