We’ve known Amazon has been deeply interested in recruiting authors and publishers to use its print-on-demand service ever since it used blackmail to compel publishers to sign up with BookSurge in 2008 (now known as CreateSpace).

In all that time I’ve only heard of the POD service being called either Createspace or Booksurge, but apparently Amazon is now distinguishing between Createspace and a second POD service.

The second service is called “Amazon POD”, and it is only open to publishers (*). 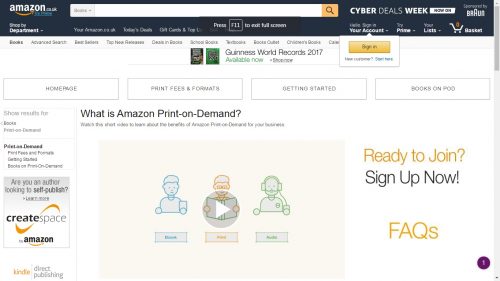 Amazon POD has been around for at least a couple years, but it only crossed my desk this week when Mark Williams found the one public mention of it on Amazon.co.uk (I can’t find it on Amazon.com).

Mark got bent out of shape over the fact that authors are excluded, but it’s not clear that they are missing much.

The pages on Amazon’s UK site revealed that Amazon POD covers the US, UK, Japan, and the Eurozone, and according to the contract (which was last updated in April 2015), Amazon POD has the exact same costs as Createspace (source).

Amazon POD is run by CreateSpace (the contact email address is [email protected]), and there is in fact little to distinguish between the two, but Amazon is promising several benefits which authors might not be receiving through Createspace.

So who is using Amazon POD?

Amazon says that a number of small publishers have signed up, including Packt, Head of Zeus, and Sage. They have also identified titles by Time Inc, Lake Union (an Amazon imprint), Cambridge university Press, and Palgrave Macmillan as having been distributed through the Amazon POD service.

Given their frequently contentious relationship, I was as surprised as you, but in a way it makes a lot of sense.

The real value of POD is that it eliminates storage costs. Publishers don’t have to invest capital in a print run which might end up moldering away in a warehouse; instead the books are printed as needed.

This is ideal for backlist and other titles which are in low demand, so one would expect to see it used heavily in academic publishing where the average print run has already dipped into three digits.

If you know of a publisher who uses this program, let us know in the comments.

I’m especially interested in first-hand reports. What did you think of it?