The Chinese gadget maker Hisense is about to become the latest company to unsuccessfully launch a dual-screen smartphone.

Phone Radar and Liliputing report that the Hisense A2 has cleared China’s regulatory agency, TENAA. The phone features a 5.2″ E-ink screen and a 5.5″ AMOLED screen. 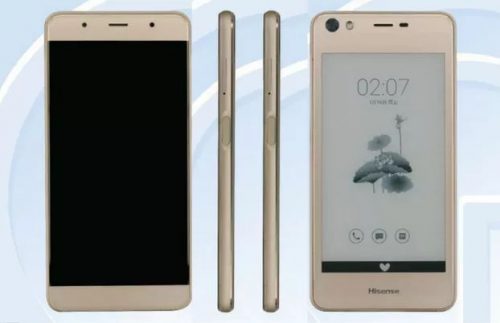 According to the paperwork, the Hisense A2 runs Android 6.0 on a 1.4 GHz octa-core Snapdragon 430 CPU with 4GB RAM and 32GB of internal storage.

It has a pair of cameras (16MP with flash and 5MP), fingerprint sensor, microSD card slot, a 3Ah battery, and dual-SIM card slots. In terms of connectivity it has 4G, Wifi, Bluetooth, and GPS.

All in all, from what we can see with the specs this won’t be a bad phone, but it’s worth remembering that we still don’t know anything about software support for the E-ink, at detail which has been the Achilles heel of this type of phone. About a half dozen dual-screen smartphones have been announced over the past few years, and so far  none of the phone makers have put forward a good use for the secondary E-ink screen.

In fact, from what users tell me most of the phones don’t support their secondary E-ink screens very well at all. And while there’s a good chance that Apple could buck that trend should the rumor of their dual-screen iPhone prove true, I don’t see Hisense pulling it off.