The internet radically changed the book industry by first making endless information available almost for free, and then by making all used books available in the world’s largest swap meet (no, not Amazon). 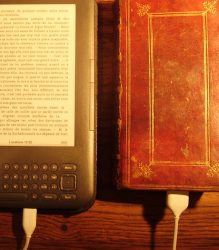 As the NYTimes reports, cheap alternatives and replacements is having the predictable impact on book repair as it did on electronics twenty or more years ago.

Libraries like the King County Library System used to employ staffs of book menders, but now King County only has the single expert on the payroll:

Donald Vass, who has spent the last 26 years mending and tending to books for the King County Public Library system here in the Seattle area, has seen both mechanical and human-inflicted damage and more. At 57 and with not many years left before retirement, he says he believes he will be the last full-time traditional bookbinder ever to take up shears, brushes and needles here. The skills take too long to learn, he said, and no one is being groomed to take his place in “the mendery,” Room 111 at the library’s central service center, where not so many years ago 10 people worked.

Menderies, often called book hospitals, were once common in library systems across the nation. But the digital revolution, cost-control pressures and shifting reader tastes pushed many libraries away from paper and the maintenance of fragile old classics. The internet has made it easy to find used books to replace worn ones, and to borrow through interlibrary lending systems.

“We don’t mend anymore; it’s a lost art,” said Alan Hall, the director of the public library of Steubenville and Jefferson County, Ohio, for the last 33 years. “It was a question of what you could do without, but it’s also technology taking the place of it.”

The NYTimes mourned the diminishment of this profession, but I was surprised that King county had any book menders still on staff.

A simple cost-benefit analysis says they aren’t worth the payroll cost any more.

The article said that Vass repaired 60 to 80 books a month. If he costs KCLS $120,000 in salary plus benefits (a not unreasonable assumption for a civil employee with his seniority) then the library is paying $10,000 a month (plus materials) to repair 80 books.

How many books are worth repairing at a cost of $130 or more?

You and I can quibble over the number, but one point which is indisputable is that for a lot of books it is cheaper to replace than repair (which is why Vass is short nine coworkers).

And that’s no big loss. While the NYTimes laments the fall of book mending, it’s also worth considering what rose in its place: a cheap network of information which can be accessed from almost anywhere.

That is a good trade off, no?