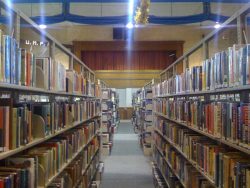 Stats from the AAP show that some publishers are seeing a decline in ebook sales, but when it comes to usage in libraries the news is very different.

OverDrive reports this morning that:

readers borrowed 196 million digital books, an increase of 21 percent over 2015. Of the 678 million visits to library and school websites, readers borrowed more eBooks (+16%) and audiobooks (+34%) from their local and school libraries digital catalog compared to last year.

The record growth can be attributed to several key factors, including:

Highlights of record-setting growth from the OverDrive global network:

The most popular ebook titles in libraries in 2016 were Julie McElwain’s A Murder in Time, followed by The Girl on the Train and John grisham’s Rogue Lawyer.

The most checked-out audiobooks were The Girl on the Train, All the Light We Cannot See, and Harry Potter and the Sorcerer’s Stone.

OverDrive has additional data which they are sharing at the American Library Association’s Midwinter Meeting & Exhibits in Atlanta.