Don’t look now, but it seems Amazon has quietly ended support for its oldest Kindle models.

Numerous Kindle owners are reporting on Mobileread that their old-model Kindles can no longer connect to Amazon’s servers over 3G, and in several cases can’t be registered with Amazon. 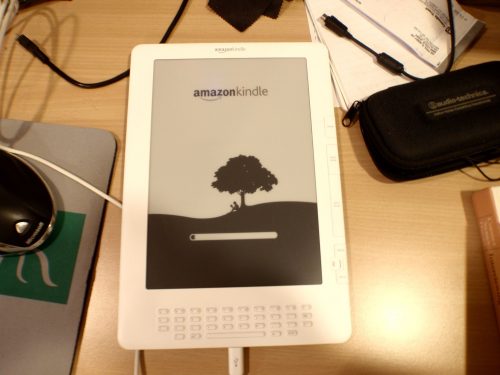 The Kindles in question include the Kindle DX, the original Kindle, and the Kindle 2. All were updated with the latest official software, including last year’s security update, and yet they can’t download ebooks from the Kindle Store.

As one owner put it:

Now that I’ve performed a factory reset on my K2, I’m experiencing the same problem. I’ve got software v2.5.8 and the Kindle Services update installed and 5 bars of coverage that allows me to browse the Kindle Store, but the device refuses to register (“Unable to connect at this time”).

A Kindle DX owner reported that they could not connect to the Kindle Store, and then could not register their DX after a factory reset.

Edit: It’s also worth noting that several Kindle owners on Amazon’s support forums are calling BS on this post because they can still download ebooks to their older Kindles. (Thanks, Albert!)

Edit: And a reader has left a comment reporting that his original Kindle went through the same cycle as the Kindle DX mentioned above. (Thanks, Tom!)

Amazon has not confirmed that they’ve stopped supporting the older Kindles; instead, Kindle CS suggested that the devices “may be too old to connect to our network” and pushed owners to buy a newer Kindle as a replacement.

At least one Kindle owner wasn’t going to take this lying down, and he sent an email to Jeff Bezos.

As mentioned, hardware updates exist for a very genuine reason. When a new device is developed, it goes through rigorous tests and quality checks. The final version of the device is released to public only when the vendor is fully satisfied with the product’s functionality and stability. When the devices are used by customers in a real-time environment, they may come across several areas of improvement and same gets reported back to the developers. Sometimes latest versions of applications will need new processes and tools to work properly, which the developers constantly include with the new software updates. However, in the occasion that the software is not enough , the needs of the apps are going to overdrive the capacity of the product, causing the malfunction of the it. To address those issues, the developers try to support those devices as much as possible until the customer needs are major than the device capabilities, then a new device with better qualities will be lunch so that users can have a convenient and well supported interface with the product.

Douglas, I’m sorry for any disappointment caused and appreciate your understanding. While we won’t be able to comment further on this matter, we’re always happy to help if you have any other questions – you can click a button to contact us by e-mail or phone from any Help page on our website.

I learned two things from this statement. The first is that Amazon’s executive customer service is staffed by engineers (read it again and you’ll see what I mean).

This statement also indirectly confirms that Amazon is no longer supporting the older models, even though it doesn’t want to come out and say so.

While it is understandable that Amazon doesn’t want to support the nine-year-old original Kindle or the Kindle DX, which launched in May 2009, Amazon still owes its customers an honest explanation.

The hardware still works (obviously), so if Amazon no longer wants to support the older devices on its platform then it should say so. This underhanded and secretive termination won’t cut it.

Amazon has replied with a statement which doesn’t match with their actions: “No we haven’t ended support.  Our Customer Service team is working directly with this customer to troubleshoot.”

Fortunately for Kindle owners, they can still use their device in spite of Amazon. So long as a device is registered, it can still read ebooks bought in the Kindle store.

Owners of older Kindles can use their PC to download ebooks from the Amazon website, and then transfer those ebooks to the older Kindle.  this is not an ideal solution but it does work.

thanks, Darryl, for the tip!