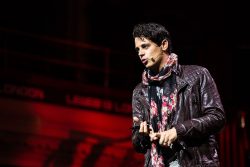 Simon and Schuster was fine with signing a $250,000 book deal with Milo Yiannopoulos even though he is a transphobic, misogynistic, anti-semitic troll who likes to hurt people.

But once everyone learned that Milo was in favor of pedophilia, well, that was a bridge too far. Milo announced the deal’s cancellation on Facebook, and S&S later confirmed the news in a statement:

After careful consideration, Simon & Schuster and its Threshold Editions imprint have cancelled publication of Dangerous by Milo Yiannopoulos.

The current furor was sparked when someone noticed that Milo had argued in favor of pedophilia in a podcast in early January. The Guardian, Boston Globe, and PW have reported on this story, but here is kicker:

Milo has since denied making these statements, but in reality he first espoused this view back in April 2016, and then elaborated on the point last month.

I have embedded both videos below: