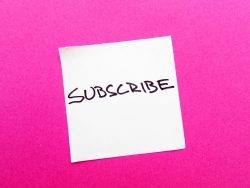 After four and a half years of floundering around, trying to find a viable business model, Medium has finally chosen one – only it is from the 19th century, not the 21st.

On Wednesday Medium announced its subscription service, which (when it finally launches) will cost $5 a month and give readers access to … something.

The service is in limited beta at the moment, but when it is more widely available subscribers will get access to:

That really doesn’t look like much; readers already have offline reading modes in apps like Pocket and Instapaper – which coincidentally offer a better reading experience anyway. So Medium isn’t offering much of value – just “exclusive stories from top writers”:

As a founding member, your contributions will be used to directly pay writers and publishers. That means new content that wouldn’t otherwise be on Medium—or wouldn’t exist at all. You’ll have access to exclusive stories from leading experts, including your favorite Medium writers, on topics that matter not just today, but tomorrow too.

Basically, Medium is making the same offer as countless other publishers in the past two centuries; pay us for our unique content. (To be fair, a lot of news publishers couldn’t even make that claim; their content was closer to filler than unique.)

Nevertheless, I am in favor of paying for content where it is worthwhile; this is why I have been a paying member of Medium since January 1970.

There was something wrong with their date system, yes.

Snark aside, here’s what I really think:

Finally, the hype bubble has burst.

When it launched in 2012, Medium was pitched as a new and unique solution to the problem of poor content on the web, but it was pretty clear by 2014/2015 that Medium had little to offer that couldn’t be found on just about any other platform.

Nevertheless, the hype persisted in the media coverage of Medium until early this year when Medium laid off a third of its staff and announced that it would be seeking a new solution to its finance problem.

That new solution is quite old, and even in its current web-only incarnation is already being used by a number of other sites, including Pando Daily, Financial Times, The Bookseller, and the NY Times.

And unfortunately, the hype isn’t dead yet; Medium founder Ev Williams still believes it. Here’s what he wrote back in January:

We believe people who write and share ideas should be rewarded on their ability to enlighten and inform, not simply their ability to attract a few seconds of attention. We believe there are millions of thinking people who want to deepen their understanding of the world and are dissatisfied with what they get from traditional news and their social feeds. We believe that a better system?—?one that serves people?—?is possible. In fact, it’s imperative.

Lofty ideals are great and all, but this is the same guy who pursued these same ideals for five years without stumbling across a business model.

It is past time for an injection of reality. Someone who knows how to turn a profit needs to take over before Medium runs out of money.