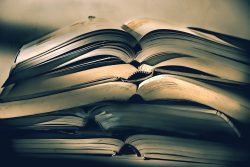 If you wait long enough, any idea, no matter how old, will become new again.

Joseph Esposito proved that point with what he calls “inclusive access”:

I have been involved with a number of projects over the years to reduce the cost of textbooks, most of which focused on open educational resources (OER), which may be the topic of a future post. The more promising approach, however, may be what is being termed “inclusive access,” a terrible phrase because it brings in a whiff of a political agenda for what is essentially a matter of business. In inclusive access, publishers work directly with institutions to come up with discounted digital versions of core texts. The institutions then license the books on behalf of the students, sometimes collecting money from the students, sometimes not. We are going to be seeing more of this, though the ultimate form of the model is not yet clear. But happen it will, as there are too many incentives for it to fail to move forward.

Yeah, that’s not a new idea.

When I wrote about this topic five years ago the practice was known as site licenses, a system where institutions negotiate a reduced license fee based on the number of students who get a license for a textbook.

I see from my post archives that there were several pilot programs in 2011 and 2012 which tested the idea. There was also a startup called Courseload which had developed a platform universities could use to manage the licensed textbooks. (Said startup has since been acquired.)

Judging by Esposito’s post, all that earlier activity came to naught –  and with good reason.

The problem with site licensing for textbooks is that it doesn’t actually solve any problem other than guaranteeing revenues for textbook publishers.

While it eliminates certain distribution costs, site licensing also introduces certain platform management costs. Any school that negotiates a site license will have to also manage access to the content. That adds costs.

And unless you can guarantee that a license fee will be less than the cost of a used copy of a textbook, it will effectively be increasing what student’s pay for textbooks while also eliminating choice (the students will not have the option of not getting the textbook).

Really, the only way to reduce the cost of textbooks is to cut publishers out entirely by replacing paid textbooks with OER textbooks.

OER, or open educational resources, are curricula which have been released under a creative commons license for students and teachers to use or modify at no cost.

For core subjects, the OER textbooks can be as good as the paid textbooks, and cost nothing. That’s why many schools have launched open textbook projects – including universities which had previously tried site licenses. The University of Minnesota, for example, had a site license pilot five years ago and an open textbook library today.

They’re not the only school to move away from paid textbooks in favor of OER; even whole states including Washington and California have launched open textbook repositories.

Without a doubt, this is the future, and anyone who tries to tell you otherwise is in the pocket of the textbook publishers.