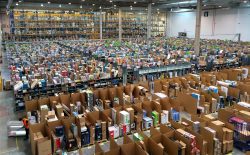 Bloomberg reports that Amazon is recruiting brands to sell “direct” to consumers.

Amazon.com Inc. has invited some of the world’s biggest brands to its Seattle headquarters in an audacious bid to persuade them that it’s time to start shipping products directly to online shoppers and bypass chains like Wal-Mart, Target and Costco.

Executives from General Mills, Mondelez and other packaged goods makers will attend the three-day gathering in May, Bloomberg has learned. Attendees will tour an Amazon fulfillment center and hear a presentation from Worldwide Consumer chief Jeff Wilke, who reports directly to Jeff Bezos.

Amazon is looking to upend relationships between brands and brick-and-mortar stores that for decades have determined how popular products are designed, packaged and shipped. If Amazon succeeds, big brands will think less about creating products that stand out in a Wal-Mart Stores Inc. aisle. Instead, they’ll focus on designing products that can be shipped quickly to customers’ doorsteps. Brands have been experimenting with such changes, so the Seattle event may well resonate.

A lot of sites are covering this story from the viewpoint that Amazon is selling more and more material, with the implication that Amazon is a giant.

But Amazon is still only a fraction of the size of Walmart’s size, and in any case the bigger story here is the tax implications.

Even though Amazon is handling all parts of the transaction, it doesn’t collect sales tax when it is technically not the seller, thus giving it the tax advantage it has always had over brick-and-mortar retailers.

That’s going to be a huge story a couple years down the line when everyone notices that Amazon has found another tax loophole.

So when the NY Times’ David Streitfeld decides to whack Amazon on this point in a couple years, just remember I pointed it out first.