While cleaning up broken links on my site last night I discovered that ebook gift card startup Livrada has quietly given up the ghost. 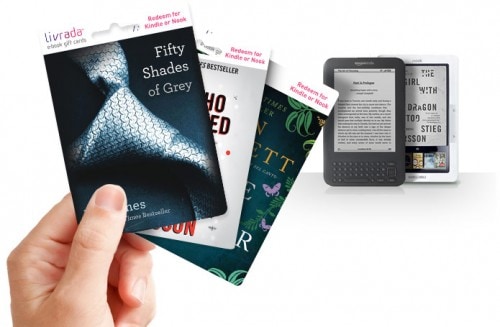 There’s been no announcement, but no one at Livrada is answering emails.

The website is down (according to the Wayback Machine it’s been broken for nearly a year). A search on LinkedIn finds a single employee who still works there and a dozen former employees, including the CEO, who have moved on (the CEO/co-founder left in December 2016).

Launched in 2012, Livrada was one of several startups that developed ebook gift card solutions for the US market. The idea was that brick-and-mortar stores could sell physical gift cards which consumers could redeem online.

Livrada initially made a big splash when they launched a pilot test in 1700+ Target in 2012, but that was apparently the peak of their retail empire. The pilot ended a short while later when Target realized no one wanted to bother with buying, much less redeeming, the card (the technical hassles are more than most consumers can handle).

Livrada then pivoted to sell the ebook gift cards on its site, and then in bulk to authors and publishers.

That was in 2013, after which Livrada quietly lid off the radar.

And now it has just as quietly become the latest ebook gift card startup to exit the industry.

There was a spate of closures in 2013 and 2014, and then earlier this year Livrada’s larger and more successful competitor Enthrill sold off its tech to Firebrand. Calgary-based Enthrill had gotten its cards into Walmart and a number of other chains in Canada only to have the market cool down in 2016 when consumers lost interest.

Amazon also ran a short-lived pilot test in Seattle drug stores last year where consumers could buy one of a limited selection of gift cards. That pilot ended with no news of when it might be repeated.