As a web guy, I try to stay on top of the latest trends and developments. That’s how I was the first to report that WordPress.com now officially lets its business plan customers install third-party themes and apps.

That’s also how I heard about DeAMPify. 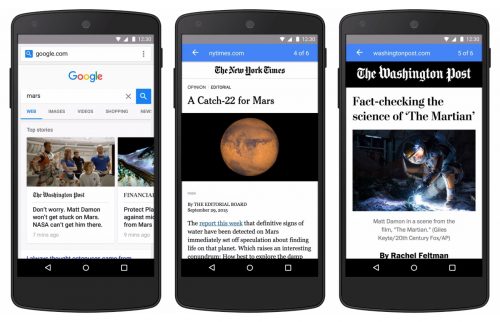 Google’s solution for fixing bloat on the mobile web is less than popular in certain circles. XDA Forums reported on their blog that an Android developer has released an app that replaces an AMP page with the original page.

For those users on fast connections, loading an AMP page versus the original page shows no significant difference in speed, but still results in less content being displayed on screen. However, unless the particular mobile app you were using has an option to disable loading a page in its AMP version, the only way to retrieve the original URL is to manually do so – adding 2 extra taps. Thanks to an idea I pitched to the AutoApps developer, João Dias, there’s finally a way to completely bypass AMP links.

The app is called DeAMPify and it is really, really fast at its job. Here is a sample screen recording I made. Note how short the time is between when I tap on DeAMPify to open the URL and how long after the original URL is opened in the browser.

The app is listed in Google Play, and here’s a demo video:

For the life of me, I can’t image why anyone would want to bypass AMP pages. My smartphone has a 3G connection, so when I browse the mobile web, AMP pages are a godsend. They’re smaller so they load faster.

And even when I get an AMP page link on desktop, an AMP page is still often better than the original – it’s like a distraction-free reading mode.

Sure, I can always revert from the AMP page to the original page with little effort.

Edit: Or, I could always install AMPforWP. This plugin installs many useful features that the official AMP WordPress plugin lacks.

Admittedly, AMP has its problems (handing Google control over a large part of the mobile web, for example) but on a personal level I see a win-win scenario.