The recent news of ClearInk’s potentially useful screen tech winning best in show at SID Display Week has inspired one blogger to proclaim that it is going to revolutionize everything. 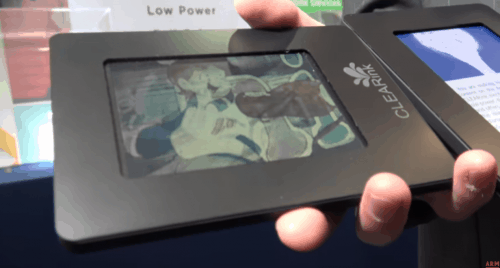 Technology changes. Unlike smartphones, e-reader technological progress occurs at a glacial pace. Incremental refinements to e-paper screens — known as E Ink — release every three years. Updates to the guts of the device (the processor) occur even less frequently.

That means major technological innovation occurs so rarely that when it does reach devices, it’s a very big deal. And two major inventions to e-readers will release sometime between 2017 and 2018.

Of the two innovations, the biggest is a new e-paper display: CLEARink. CLEARink comes in two versions. The first, CLEARink “video,” releases at the tail end of 2017. The second, CLEARink “bistable,” may release in 2018 and targets digital signage, e-readers, and more.

The rest of the piece reads like a MakeUseOf was paid to publish it; it gushes about how the tech works, and frankly doesn’t have to be repeated here.

And that’s because it is worthless twaddle.

The second half of the piece, for example, focuses on how Freescale’s next-gen IMX.7 CPU is a Kindle killer because it is so awesome. (Yes, apparently the MakeUseOf  blogger was unaware that CPUs go into ereaders; they do not kill ereaders.)

I am skipping over the Freescale IMX.7 because, frankly, if it were that amaze-balls then we would already see it in ereaders. It was announced in 2015 and went into production last spring, and yet ereader makers like Pocketbook, Onyx, and Netronix are going with the older IMX.6 chip or multi-core chips from other chipmakers.

Instead, I want to focus on the premise that ClearInk is a Kindle-killer display.

This argument is being made in the absence of: a firm release date, a device manufacturing partner, a prototype unit, or a ship date for the production unit.

There is exactly nothing to back up the idea that this tech will be as useful, cheap, or innovative as they claim.

Furthermore, we already have a Kindle killer – two of them, in fact.

Between one and the other, the ereader market has already been killed. It’s a fraction of the size it was five years ago, and the industry has been winnowed down to just Amazon and three companies (the aforementioned Pocketbook, Onyx, and Netronix).

So we already have a Kindle killer; it’s called a tablet, and Amazon makes a bunch.

Could ClearInk prove to be an LCD killer, as Chris Meadows argues over on Teleread?

Not with the current standard of tablets and smartphones with either expensive/beautiful or cheap/adequate screens, no.

On the one end of the market, ClearInk can’t compete with the quality of high-end OLED and AMOLED screens, and on the the other end it has to compete with dirt-cheap LCD screens.

Speaking of which, did you know that no company that produces LCD screens makes money off of them? That’s how cheap prices have gotten.

ClearInk would have to sell their screens at a loss to get into the mobile device market, and that just isn’t going to happen.

That’s why the company is going to focus on other markets – if their screen tech ships at all.