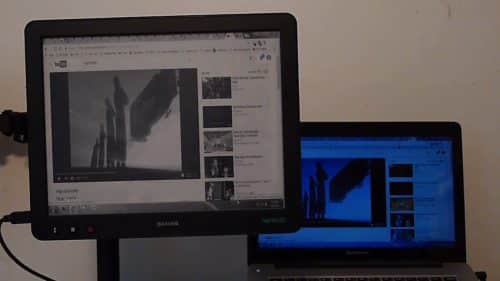 Stare at a computer screen everyday for years on end and eventually you’re going to develop vision problems. It might be headaches, or simply an inability to keep both eyes in focus.

That is exactly what happened to me, and I consider myself fortunate that my vision problems only took a turn for the worse after I met Dasung’s E-ink monitors.

Paperlike is a line of monitors based around a 13.3″ E-ink screen. The first model came out in 2015, and (to be frank) was crap. The drivers weren’t finished and didn’t work, and a lot of buyers reported that their units died in just a few months.

The second-gen Paperlike came out last year, and it was pretty good. It was still slow (and hella expensive) but it could be used for basic activities like typing.

The third-gen model, the Paperlike Pro, came out this summer. It’s still expensive but Dasung finally got the hardware and drivers right, and I feel I can finally say this is the one you should buy.

In fact, I am writing this review on the Paperlike.

For the record: I bought an original Paperlike with my own money. Dasung gave me the two later models. (Nevertheless, I still think the second-gen model is only worth using if you are absolutely desperate).

The Dasung Paperlike Pro features a 13.3″ E-ink display with a screen resolution of 1600×1200. With a 150 PPI, it is a relatively low resolution screen compared to the Kindle Paperwhite (or a lot of smartphones) but it is still sharper than the screen on a lot of laptops.

The Pro, is designed to work as a secondary (or even primary) display for your computer, which is why it lacks a CPU, or any type of input. It is strictly a display, and it fills that role well.

It has exactly three buttons on the front: screen refresh, power, and “M” (for changing the display mode).

I have had one for about two months now. At first I just fiddled around with it, but for the past month or so I have been using it just about every work day. I installed my Pro on a monitor arm, and whenever I need to do a lot of typing, or whenever I feel my eyes are getting tired, I swing the Pro in front of my laptop’s screen.

I am typing this post on the Pro right now, and I type a lot of posts using this monitor. It is a permanent addition to my workspace, so much so that I am planning how I might take it with me on trips.

I m so committed to the Pro that I even spent time finding the best software tweaks to get the most out of it.

The Paperlike Pro runs off paired HDMI and USB cables, so it is (mostly)  plug-and-play e-ink monitor.

I qualify that statement because if you don’t install the drivers (and run them every time you use the Pro), a nag screen will pop up every few minutes, telling you that your Paperlike Pro is going to explode into a million pieces.

But even when you do install the drivers, you will only be using about 60% of the Paperlike Pro’s full abilities; if you want to get the rest of the way there you will need to learn the software settings and how to optimize apps so they work well on the Paperlike Pro.

My preferred choice is to use the Floyd display mode and set the Paperlike Pro as a mirrored monitor because it is the easiest to use. Yes, I am missing out on the full 1600 x 1200 pixels, but I am okay with that.

I did try using the Paperlike Pro as a second monitor, but I found that the different screen resolutions meant I had to keep adjusting font sizes every time I switched between the Pro and my laptop. It was just too much of a bother given that I had to go back and forth every few minutes (I like using the Paperlike Pro, but its grayscale screen misses a lot of nuance).

Here are a few details about the display modes:

Floyd is the display mode I use the most. It has its issues (sometimes I have to refresh the screen so I can see what I am looking at) but this is the mode that really makes the Paperlike Pro usable. It’s a feature competitors will have to copy or duplicate should they release an E-ink monitor.

Really, though, the 3 display modes are just the beginning; to get the most out of this monitor you’ll need to tweak the settings and learn how to tweak apps so they play nice with E-ink screens.

The Paperlike Pro settings menu lets you change display modes, micro-manage the contrast, and there’s also an option to change from your computer’s native color theme to a gray or white option. (You _will_ want to use one or the other option, trust me; they make tabs on Chrome actually legible on the Paperlike Pro’s screen.)

You should also look into how you can get apps to look their best on E-ink. Chrome, for example, has a high-contrast extension that effectively changes everything to grayscale. That extension  makes twitter and other websites actually usable on the Paperlike Pro, and without that extension the web browsing experience is just frustrating enough that I would have given up on the idea.

And that, in a nutshell, is the experience of using the Paperlike Pro.

There are some products like the Kindle Paperlike that are finished consumer products that work just awesomely out of the box.

But then there are other products, like the original Kindle, which benefit from learning just a few subtle tricks and tweaks in a beginner’s guide.

The Paperlike Pro definitely falls in the latter category. There’s a half-dozen small things you can do, and effectively double its usability with each one.

Learn how to use them? 2x

I am not pointing all this out to complain about the Paperlike Pro; I think the extra work is worth it.

What I am trying to say is that anyone who doesn’t want to put in the extra work will not get the most out of this expensive device, and shouldn’t buy one.

The Paperlike Pro can be bought for $800 on Indiegogo.