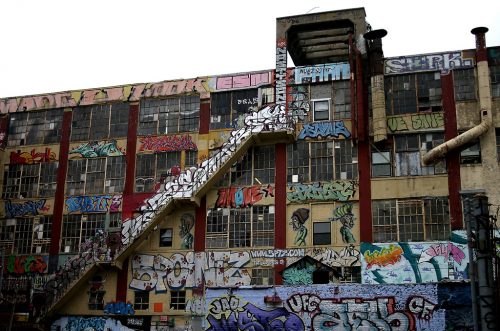 The only branch of law that is more obtuse and arcane than copyright is property  law, so when the two intersect there is no easy way to predict what will happen.

The Guardian reports that a New York property magnate has lost a landmark copyright lawsuit:

A jury has ruled that a real estate developer broke the law by destroying a swath of graffiti art in New York City, in a verdict that could provide legal protections for street artists across the US.

The federal jury made its decision after a group of artists sued Jerry Wolkoff, who painted over their work at the 5Pointz building in Queens, New York City, in November 2013.

5Pointz, a former factory owned by Wolkoff, was a haven for graffiti artists from around the world and became a prominent tourist attraction. Wolkoff had given the artists permission to use the building as a canvas for “aerosol art” and the building was covered in multicolored murals and tags.

On Wednesday the jury decided that the artists’ work was legally protected under the Visual Artists Rights Act (Vara), and that meant that Wolkoff had broken the law. It was the first time graffiti, or “aerosol art” had been given that protection under federal law, potentially meaning thousands of graffiti murals across the country could now be preserved.

One would think that the building’s owner would also own any decorations applied to the structure, but it’s not that simple. The artists won their suit based on what is better known as moral rights clauses of copyright

Moral rights refer to a creator’s right to things like attribution, the use of their name on works they did not create, and the right to prevent distortion, mutilation, or modification of their work. . This is a part of copyright law overreach that the US has mostly avoided implementing, although it has been codified into law in Europe.

Under VARA, the graffiti artists have the right to keep their work from being “distorted, mutilated, or modified”.

While I’m sure that everyone has jumped to the worst case scenario, that this means a single piece of graffiti defacing a building can keep it from being remodeled or demolished, fortunately, the situation is not nearly that dire.

According to the summary posted by Harvard Law School, VARA includes a couple major loopholes that the building’s owner could have used to their benefit.

No, I don’t think the artwork was removable, either, but that 90 days notice would have shifted the responsibility from the building’s owner to the artists.

Lawyers are hesitant to bring VARA lawsuits unless the suit is a slamdunk, so that notice might probably have saved the developer from years of legal battles.

On the other hand, maybe not. The artists had lost a couple VARA lawsuits before finally winning this one. They had the resources and inclination to fight a legal battle where the odds were stacked against them, so even if the law were 100% against them they might still have fought.