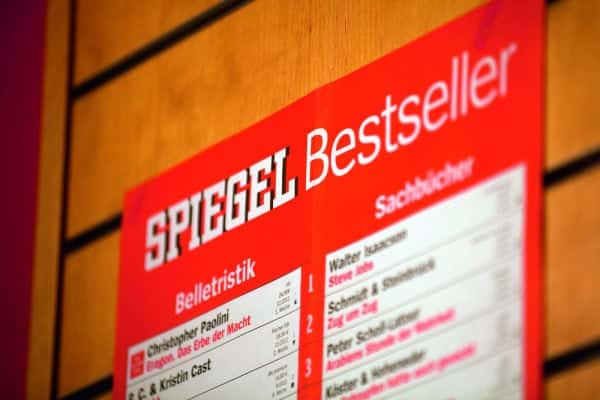 Best-seller lists are easy to game, which is why the term has almost no real meaning other than as a marketing gimmick. Now Spiegel wants to cash in.

Starting after the first of the year, this weekly German news magazine is going to charge publishers for the use of its official logos. Spiegel is going to charge 250 euros per title for the use of logos in previews and advertisements, and another 250 euros for using the logo on a book cover. There is also a premium package “Spiegel Bestseller Platz 1”, but customers only get the price on request.

They’re framing this in terms of standardizing their branding, telling Boersenblatt that “several dozen different variants of our bestseller logos were found in our own research,” but this is clearly an attempt to monetize their brand. Spiegel thinks their list helps sell books, and they want their cut.

Publishers  have a different opinion, however. Several have already stated that they will not pay. For example, both Diogenes , one of Switzerland’s largest publishers, and Random House Germany have declined, and Bonnier Media has even gone so far as to question whether this is legal.

This is probably legal, but it is certainly not wise. By licensing the use of the logos, Spiegel is adding the appearance of a financial incentive. It has cast doubt on whether books made the Spiegel best-seller list in the future on their merits or because Spiegel wants to sell licenses.

That list had value to consumers because it was impartial. Now that publishers can buy the logos, can anyone really trust the list’s legitimacy?