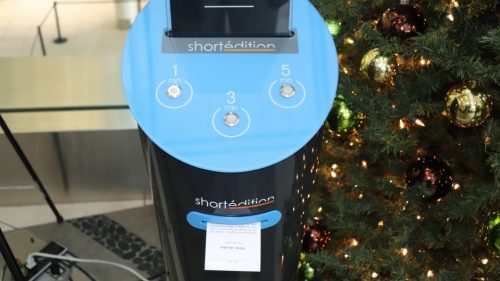 So the latest hot and trendy bookish gimmick is a receipt printer that has been gussied up as a “vending machine” that prints short stories. This fad is the work of a French startup called First Editions, which has been selling these machines since 2011.

Now Quill and Quire  reports that one of these machines was installed at Edmonton International Airport in Canada.

Waiting in line at the Edmonton International Airport just got a bit less boring thanks to the recent addition of a short story vending machine. With the punch of a button on the Short Story Dispenser, weary travellers can select a free one-, three-, or five-minute read by a local author, which is printed on a “papyrus” – a small scroll of paper much like the receipt you get from an ATM.

The machine is the creation of French startup Short Edition, which has placed 150 Short Story Dispensers in cafés, schools, and public venues since the company’s founding in 2011. The Edmonton machine is only the second in an airport, however, with the first being at Lyon–Saint-Exupéry Airport in France.

I was underwhelmed when these printers were first announced because they are, well, just receipt printers.

This would be an interesting project for a hacker working out of their basement and showing off the device on Hackaday. I mean, you can buy one of these printers online, have a case designed to cover it, and then get a college student to bang together code to print stories. It’s really not that difficult.

But as a commercial product from a startup, this device is about as interesting and innovative as the startup that charged you $27 to mail you $20 in quarters.

Why does everyone find this so exciting?