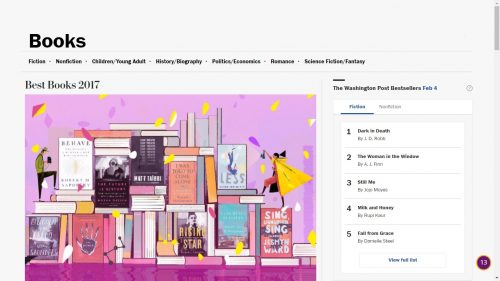 It looks like Amazon has found a customer for data from Amazon Charts, the weekly best-seller list launched in May 2017.

the Washington Post is now sporting a new best-seller list. “Introducing The Post’s bestsellers lists,” the headline reads, followed by:

You probably won’t be able to find the blurb; I couldn’t, even after a reader tipped me to the story (thanks, Miss M!). But the new lists are featured prominently on the Books section homepage, where they are the first widget in the sidebar. If you scroll down, you will see that Amazon Charts is cited at the foot of the widget.

Update: The Post PR dept sent me a link to the announcement which was posted this morning. It says that the Post is the first publisher to to use data from Amazon Charts, and that the data is used to inform both the best-seller lists as well as a local Most Read Books D.C. list. Also:

The Post’s lists are backed by new in-house technology, called Bradbury, which speeds the editing process using a streamlined workflow, allowing a single editor to create far more lists in much less time. Bradbury enables The Post to automatically import data from multiple sources and opens up the opportunity to syndicate its lists via an API. Heliograf, The Post’s automated storytelling system, will be used to generate a data-driven weekly synopsis detailing any movement on the list from the week prior, including noting fastest rising titles, authors, new additions and historic performance on the list. Titles in the lists will also link back to the Post review of the book when applicable.

Bradbury is part of Arc Publishing, The Post’s software-as-a-service business.

The Washington Post is owned by Amazon CEO Jeff Bezos, and had previously used data from Nielsen Bookscan for its best-seller list. That only provided data on print sales, and so it was a less than complete view of the market, while the new lists factor in Amazon’s ebook sales and reads in Kindle Unlimited.

The new lists don’t quite match either Nielsen’s list or Amazon Charts, and instead make it obvious that the data comes from two sources.

Best-seller list such as the New York Times’s list are known for having little to do with actual market sales and are notoriously easy to game. The Washington Post’s lists are probably the first to accurately reflect what people are reading, and not what some New York book editor thinks is worth reading.

It is still not a perfect view of the market, obviously; Amazon only accounts for 75% of the ebook market, which means this new list is still missing a small fraction of the overall book market.

But it is still better than a kick in the teeth.