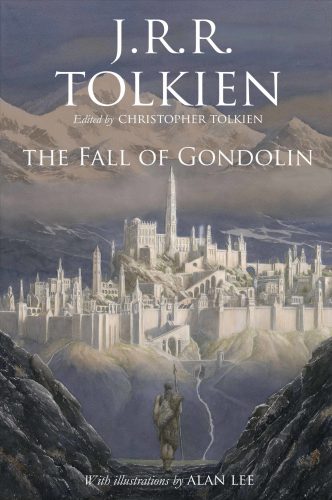 Terry Pratchett may have avoided ghouls robbing his literary estate after his death, but other authors were nearly as lucky. Some authors (for example, Harper Lee) were still alive when the ghouls started feasting, while others were at least gracefully dead.

Now J R R Tolkien has been selected as the next course.

The Guardian reports that Tolkien’s “new” book will be published this summer:

JRR Tolkien’s The Fall of Gondolin, his tale of a beautiful, mysterious city destroyed by dark forces which The Lord of the Rings author called “the first real story” of Middle-earth, will be published in August.

The Fall of Gondolin will be the second “new” Tolkien work to be released in two years, following the release of Beren and Lúthien in May 2017. Edited by Tolkien’s son Christopher Tolkien, and illustrated by The Hobbit and The Lord of the Rings artist Alan Lee, its announcement came as a surprise even to Tolkien scholars: Christopher Tolkien, who is now 93, had described Beren and Lúthien in a preface as “(presumptively) my last book in the long series of editions of my father’s writings”.

The book, said publisher HarperCollins, sets the “uttermost evil” of Morgoth against the sea-god Ulmo. Morgoth is trying to discover and destroy the hidden city of Gondolin, while Ulmo is supporting the Noldor, the kindred of the elves who live in the city.

The story follows one of the Noldor, Tuor, who sets out to find Gondolin; during his journey, he experiences what the publisher described as “one of the most arresting moments in the history of Middle-earth”: when Ulmo, the sea-god, rises out of the ocean during a storm.

This story was not published during the author’s life, and with good reason. The author had judged the story not good enough to be released, but now a ghoul has decided to publish it.