Remember earlier this year when the basic Kindle disappeared from the Kindle listings on Amazon.com, only to return a few days later?

While writing a post on Amazon’s new trade-in offer this morning, I noticed that the Kindle Voyage was no longer listed in the menus or the comparison charts on the Kindle product pages. If you look right now you will see only the basic Kindle, the Paperwhite, and the Oasis. 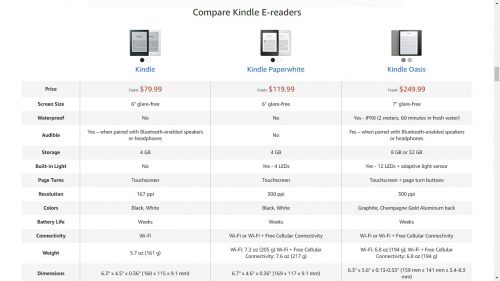 A certain fool has jumped to the conclusion that the Voyage has been discontinued (just like he did last time). He was wrong then, and I suspect that he is wrong now, which is why I will merely note that the Voyage is absent.

It would make sense that Amazon would  discontinue the Voyage, though. It is four years old, and it has the clunkiest design. It’s not cheap like the basic Kindle, or minimalist like the Paperwhite, or premium like the Kindle Oasis. Retiring the Voyage would leave Amazon with 3 Kindle targeting three distinct types of users.

The Voyage would add nothing to that, which why it would make sense to discontinue it – if that is actually what happened.