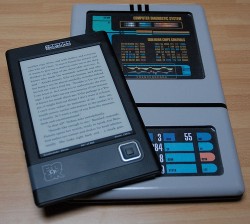 Thanks to intense competition in consumer electronics, we have a vast selection of screen sizes to read on. The ereader industry (which at this point is the Kindle, plus or minus a percentage point) has largely standardized on the 6″ to 7″ screen size. But there are a few ereaders with larger screens, and thanks to the rise of tablets the potential screen size for a reading device now ranges from pocketable to table-top (literally).

So what size screen do you like to read on?

I used to spend a lot of time reading on my 4″ smartphone, but I am finding it to be too small. Between the short lines of text and frequent page flips, it’s just not a pleasant experience. I can’t get engrossed in a book, and I find myself longing for the larger screen of my tablet.

How about you? Does the size of the screen impact your enjoyment of a book?