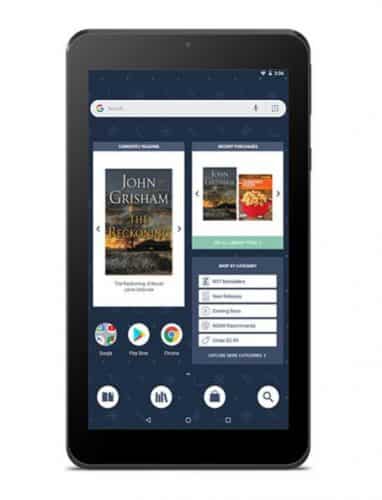 Barnes & Noble has defied conventional wisdom, and is launching its new Android tablet two weeks into the holiday season rather than weeks before. They’ve just announced a new 7″ Nook tablet, which is available now for $49 in B&N stores (it’s buried in the back of the store) and online.

B&N doesn’t tell us much about it, but from what we know it is a fairly ordinary 7″ tablet with unimpressive cameras (VGA, 2MP), 16 GB internal storage, a 1024 x 600 resolutions screen, Wifi and Bluetooth, and 7 hours of battery life.

There’s no word yet on CPU or RAM, but I am confident that gadget geeks will ferret out those details soon. I doubt it will matter, though; I am sure there are many other tablets in the same price range with similar capabilities.

The specs will be unimpressive because Barnes & Noble doesn’t care how many of these they will sell; we can tell that from the launch date. This tablet is launching in the middle of a shopping season when many competing tablets are on sale, and after a lot of people have already bought a cheap tablet.

I mean, Amazon had the 7″ Kindle Fire for $30, and if that didn’t clear out the market I don’t know what will.