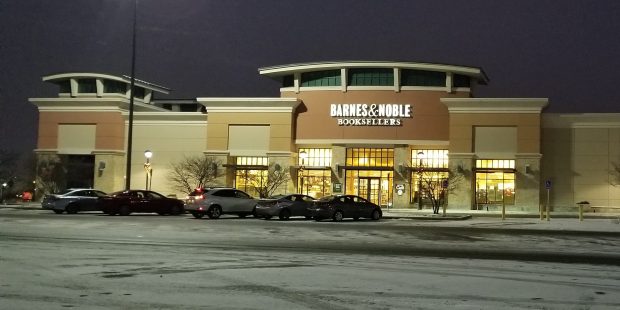 I think we just found out why B&N Press has been periodically adding new features while at te same time B&N has been stripping any sign of the Nook from its stores (one, two).

A friend has slipped me an early copy of the press release where B&N announces it is selling its Nook division to Najafi Companies, the parent company of Author Solutions. The announcement isn’t scheduled to go out until Thursday, but I got a copy because my source knew I would be able to get the attention of authors and others who would oppose this deal.

As you may recall, Najafi Companies bought Author Solutions from Penguin Random House in 2016. The price was not disclosed at that time, and  we don’t know the sale price of the Nook division, either. It was valued at a couple billion dollars at one point, but that was before the bubble burst.

B&N launched the Nook back in 2009 only a few months after buying Fictionwise. Over the next several years the Nook quickly grew into the second largest ebook retailer, and then for reasons no one understands, B&N’s ebook bubble burst in the 2012 holiday season.

The Nook division has been in decline ever since, totaling only $24 million for its third fiscal quarter.

I had been hoping someone would come along and turn around the Nook, but to be honest I would rather B&N pass on this deal. Selling Nook to a company that wants to combine it with Author Solutions is a deal that is frankly worse than death. Anyone would have been better than Najafi, including Amazon.

I wonder if Rakuten made an offer?

Najafi Companies. today announced it has entered into a definitive agreement to acquire Barnes & Noble’s NOOK digital business, a leader in the e-book marketplace. Najafi Companies said it plans to use NOOK as part of its overall digital strategy, including by integrating NOOK and B&N Press into Author Solutions, Najafi Companies’s self-publishing services company.

“The Barnes & Noble Board of Directors carefully reviewed strategic alternatives, and believes this transaction is in the best interest of shareholders, authors, and readers. It will strongly support our transformation efforts,” said Leonard Riggio, Chairman. “This sale will allow Barnes & Noble the flexibility and runway it needs to complete the transformation required to adapt to a changing retail market.”

“The purchase of the Nook digital business is an important part of our strategy to capitalize on the growing ebook services market, and to solidify our position as a leader in the exploding market for digital services in the consumer and education segments,” said Jahm Najafi, CEO of Najafi Companies.

William E. Wood, EVP and President of Digital at Barnes & Noble, will oversee the transition, and will assume a new position of VP, NOOK, at Najafi Companies.

“The shift to digital is putting the world’s libraries, newsstands, and bookstores in the palm of every person’s hand, and is the beginning of a journey that will impact how people read, interact with, and enjoy new forms of content,” said Wood. “This deal will accelerate e-reading innovation across a broad range of devices, enabling people to not just read stories, but to be part of them. We’re at the cusp of a revolution in reading.”

Najafi Companies is an international private investment firm based in Phoenix, Arizona, targeting education, media, consumer products, internet services, and direct marketing sectors. The firm makes highly selective investments in companies with strong management teams across a variety of industries, often in areas undergoing rapid transformation. Najafi Companies funds its investments with internally generated capital, not through a fund. The firm is able to move quickly and decisively when investing and make investments that create maximum value for the long term.

Barnes & Noble, Inc. (NYSE: BKS) is the nation’s largest retail bookseller, and a leading retailer of content, digital media and educational products. The Company operates 627 Barnes & Noble bookstores in 50 states, and one of the Web’s premier e-commerce sites, BN.com (www.bn.com). The Nook Digital business offers a lineup of popular NOOK® tablets and eReaders and an expansive collection of digital reading and entertainment content through the NOOK Store®. The NOOK Store (www.nook.com) features digital books, periodicals and comics, and offers the ability to enjoy content across a wide array of popular devices through Free NOOK Reading Apps™ available for Android™, iOS® and Windows®.

General information on Barnes & Noble, Inc. can be obtained by visiting the Company’s corporate website at www.barnesandnobleinc.com.