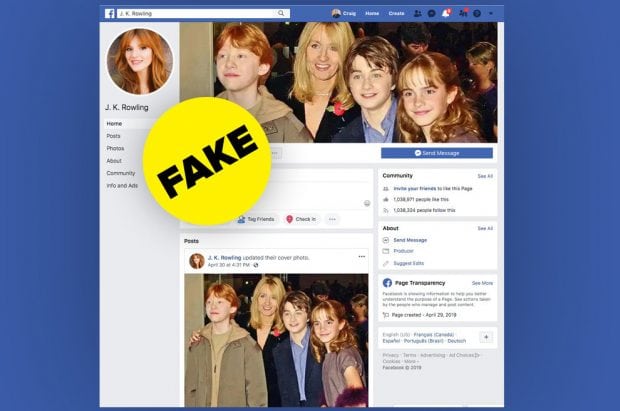 Facebok has long had an issue with hackers stealing control of pages. This problem has been cropping up every year since at least 2012, but now hackers have come up with a new twist – one that has left Facebook baffled.

Buzzfeed reports that hackers have been stealing control of pages made and owned by FB itself:

A few days ago, content from a new J.K. Rowling Facebook page began appearing in the News Feeds of people around the world, causing a wave of confusion. Though it had more than 1 million fans, users swore they’d never liked the page.

“There’s something sketchy about this whole page. It was created yesterday, and I definitely never ‘liked’ it or followed it, yet it shows that I did. Wtf?” wrote one person.

They were even more puzzled when the page uploaded a profile picture of former Disney actor Bella Thorne rather than the author of the Harry Potter books. “PLOT TWIST: JK Rowling was Bella Thorne all along!” said one commenter.

But the page doesn’t belong to Bella Thorne, or J.K. Rowling. Instead, it’s the work of a spammer who essentially hijacked a Facebook page to harvest advertising dollars.

The fake J.K. Rowling page sprang to life April 29, complete with more than 1 million fans, thanks to a deviously clever technique used by spammers to steal unclaimed Facebook interest pages and use them to make money.

No one is quite sure how it’s being done, but over a hundred stolen pages have been identified, with a collective 55 million likes. Some had been under control of hackers for weeks, if not longer.

The pages in question started out as what is known as “interest pages”, and were automatically generated by Facebook based on the interests that users list in their profiles. Most of the pages had no real connection to their respective subjects, and until the hackers took control the pages didn’t have humans managing them. (This is likely why the hackers got away with it for so long.)

I first heard about this story after I discovered I was following a page I had never heard of. My initial assumption was that FB was making me like pages for their own purposes, but then I found the Buzzfeed story, suddenly it all made so much more sense.

Have you seen this?