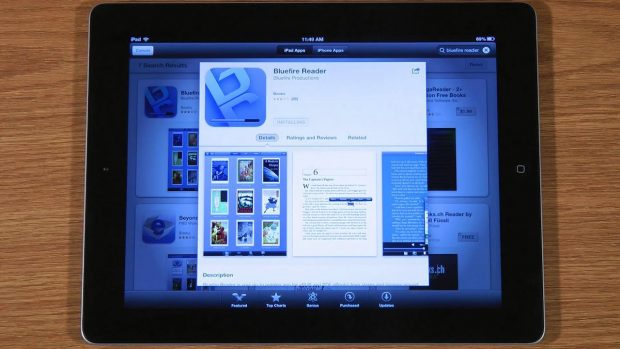 While there has been no official announcement, the venerable Bluefire Reader is on its way out.

Leading ebook app developer Bluefire has decided to retire its Android and iOS apps. The company will continue to develop apps for third-parties, but it will no longer support a free version.

The Android app was retired in July, and I have been told the iOS app is on the chopping block.

Android version, yes. Currently thinking of going to paid on iOS but waffling

The sad truth is that Bluefire can no longer afford the cost of the ongoing maintenance and support for the free apps, because paying work must come first.

Bluefire CEO Micah Bowers also told me that the company had received several requests to find a way to keep Bluefire Reader in the stores. The team at Bluefire is currently brainstorming on how to raise funds. Micah told me their best idea so far is to start charging $3.99 for the app in iTunes and Google Play.

The Bluefire Android app is actually still available in Google Play. Judging by the 1.7-star rating, it was never that good of an app and will not be missed.

Blufire’s iOS app, on the other hand, was at one time the hot iOS reading app. Everyone was talking about it when it debuted It has since slipped to #89 in Book Apps in the iOS App Store, where it still has a 4.6-star rating.