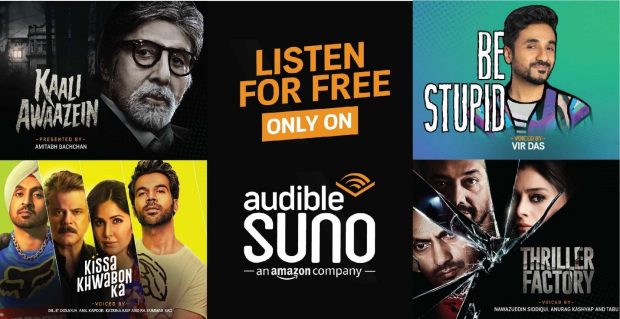 Amazon launched a new audiobook app in India about a month ago.

The Audible Suno app, which is available exclusively in India, features more than 60 original and exclusive series in both Hindi and English languages.  Each episode of what Audible is calling “audio shows” is 20 to 60 minutes in length.

The audio shows are available in a variety of genres and on a number of categories, including  suspense (Thriller Factory), horror (Kaali Awaazein), romance and relationships (Matrimonial Anonymous and Piya Milan Chowk), and comedy (The Unexperts by Abish Mathew). Non-fiction shows include interviews with some of the country’s biggest stars, and discussions on socially relevant subjects such as mental health, sex education and the rights of the LGBTQI+ community.

Given that the series are episodic, it sounds like these are actually podcasts in another name. But while I am seeing that label used in some of the stories covering the Audible Suno launch, Audible certainly isn’t using it.

Do you think they are trying to avoid people making the connection, or what?

You can find the free, ad-free app in Google Play.