CES has grown to be a trade show attended only by the most brave or foolhardy (plus a few blackmail victims). I stopped going a few years ago when it got to be too much, but I still follow it from afar.

There is almost no ereader news or ebook news this year, but E-ink is popping up all over. Their screen tech has already shown up on a couple new smartphones, and a laptop.

Lenovo just revealed a new laptop that sports a 10.3″ screen on the backside of the 13.3″ screen. 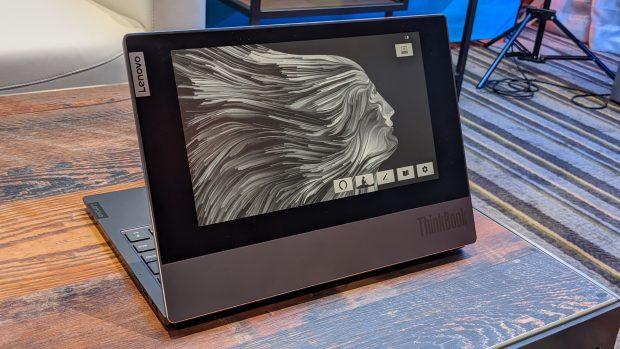 Tom’s Hardware reports that the laptop is going to retail starting at $1,199. It doesn’t sound like they’ve worked out all the use cases yet, but we do know that when the laptop is closed, the E-ink screen can show calendar and email notifications from Microsoft Outlook. You can take notes on the E-ink screen using Lenovo’s included stylus.

Basically Lenovo is positioning this second screen as a bigger and more physically awkward alternative to your smartphone or tablet. I do not see the appeal. 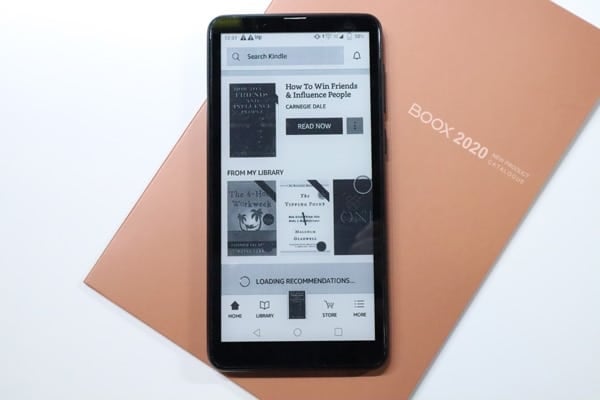 Notebook Italia reports that Chinese ereader maker Onyx is showing off a new smartphone. It doesn’t have a name yet or a final spec sheet, but at this time the phone sports a 5.8″ E-ink screen, runs Android 9.0 Pie, and offers several different refresh modes.

This is not Onyx’s first E-ink smartphone, but if it is released it could be their first commercially successful one. Onyx released the world’s first E-ink smartphone in 2013, only to cancel it less than a couple months later. Their later models were equally hard to acquire, and TBH I can’t recall that they were released for sale at all (please correct me on this).

I don’t expect to ever have an opportunity to buy an Onyx smartphone, but Hisense’s new phone – the one with a color E-ink screen – is a different matter. 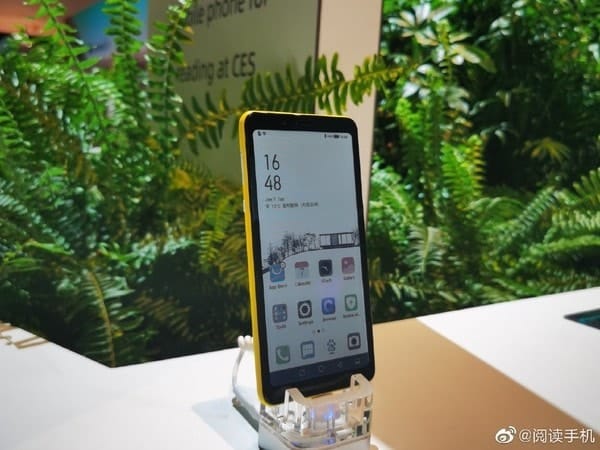 Hisense is showing off a smartphone that uses E-ink’s new Paint screen tech. I haven’t found many details on the phone yet (for some reason, no one has even mentioned its name, much less its specs) but I do know that the screen tech its using offers much better color quality than E-ink’s first generation color screens, which debuted in 2011. Those screens had a grey undertone due to the filter placed on top of the screen, while this one looks white in all the photos I have seen.  It also refreshes a lot faster, too.

It still remains to be seen if E-ink can work the bugs out of the production process, so there’s no guarantee that the Hisense phone will reach the market.