Remember way back in June 2013 when I showed you a proof of concept design for a battery-less E-ink screen powered by NFC?

The idea never saw widespread adoption, but I have some good news for you today. You can now buy E-ink screens in 7.5″, 4.2″, 2.9″, and 2.13″ sizes which will draw power and data from the NFC chip in your smartphone. 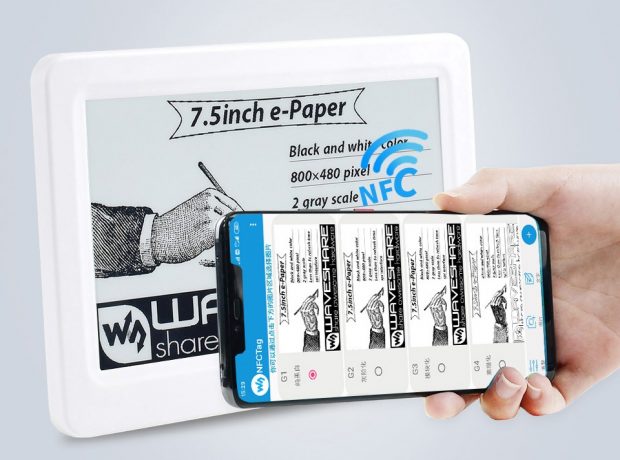 The screens are available both with and without a base station that you can use to program them. The base station has an NFC chip, a micro-controller chip, and a microSD card slot, and adds about $20 to the price of each unit.

If your smartphone has an NFC chip, you _probably_ don’t need the base station.  Your best bet would be to order a screen, and then get the base station later if you run into problems (it costs $25 when bought by itself).

You can find the screens in the E-ink section on the Waveshare website.

So how would you use them?

If  conventions weren’t suspended for the duration, I would get either the 7.5″ screen or the 4.2″ screen and make my own con badge. It would be something no one else had, thus giving the the ultimate geek cred.

Alas, I don’t think I can afford it at the moment.