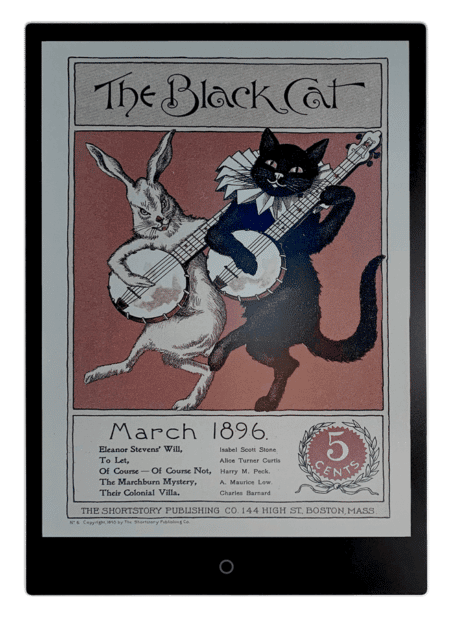 With several new color ereaders (such as the Onyx Boox Poke 2 Color) launching in 2020, everyone is wondering just what kind of screen tech is going into the new devices.

And now I have the answer.

E-ink’s new screen tech is called Kaleido, as I have previously reported.  This is a reference to kaleidoscopes, those toys “with two or more reflecting surfaces tilted to each other in an angle, so that one or more objects on one end of the mirrors are seen as a regular symmetrical pattern when viewed from the other end”.

A Kaleido E-ink screen does not have a new type of E-ink screen. Instead, it pairs a Carta HD E-ink screen with a color filter layer. This is similar in design to the older Triton color E-ink screens, although obviously with a much higher resolution and better color quality.

The Carta screen is capable of displaying 16 shades of gray at a resolution of 300 PPI, which the color filter layer is responsible for converting into 4096 colors .

(BTW, it’s worth noting that E-ink made a similar claim about the Triton being capable of displaying 4096 colors, but that screen never lived up to the promise. It remains to be seen if the new Kaleido screens will pull it off.)

A back of the envelope calculation shows that the Kaleido screens require two grayscale pixels for each color pixel. This raises interesting questions which E-ink has not yet answered. 4096 colors is 2^12 colors. The intensity of a color is controlled by the grayscale pixels underneath, and the Carta HD screen is capable of displaying 16 shades of gray, so theoretically the Kaleido screen should be capable of displaying 2^15 colors (32,768).

Edit: With Pocketbook saying this screen is capable of displaying 100 PPI in color, it suggests that each color pixel requires 4 grayscale pixels.

I have asked E-ink about the discrepancy, and will report back.

In the mean time, here’s the new screen in action on the Onyx Boox Poke2 Color.