One of the more common arguments made by defenders of the Internet Archive’s site, The Open Library, is that it is a library. They point out that it lends ebooks using expiring licenses and DRM tech quite similar to what public libraries use via Overdrive.

What they are hoping you will overlook is that The Open Library doesn’t source their ebooks like real libraries do.  A real library pays for ebook licenses from legit distributors such as Overdrive or Biblioteca, while The Open Library buys and scans used print copies, and then shares copies of the scans. (This is why four publishers filed a copyright infringement lawsuit last week.)

The Open Library even encourages people to donate the purchase price of a used book so it can be scanned and distributed. I discovered via Twitter yesterday that the IA has been encouraging those “sponsorships” since the middle of last year. They even have a page on their site devoted to the effort where they mislead supporters on the legality of the project. 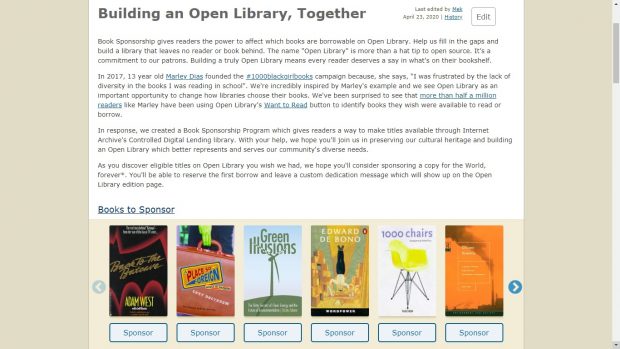 The thing about that page is that any other library wouldn’t ask you to donate the cost of a used book so it could be scanned and shared. Instead, they would ask you to help it buy a license to one of these books.

Other libraries would get that ebook from a legally-authorized distributor, ensuring that the publisher and author got paid for their work. When The Open Library lends an ebook, on the other hand, no one is getting paid.

The simple truth is folks that The Open Library doesn’t act like other libraries because it isn’t a library – it’s a pirate site.