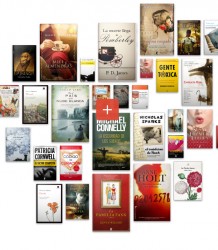 The newly launched ebookstore Bilbary got a lot of attention at BEA 2012 the week before last with their plans to get into ebook rentals and try other new business models. As interesting as that news was, Bilbary wasn’t the first to get into this niche.

I recently caught up with Justo Hidalgo, one of the founders of 24Symbols, and he was kind enough to answer some questions.

Yes. Our primary focus is Spanish content first and since a few months ago, English content as well. We already have a few publishers signed and on board from the UK, and we will add more in the near future. We also have a few deals signed with US publishers which books will be added before the summer. But what you seen now is the result of the effort of last year and the first Q’s efforts in Spain, with publishers like Roca, Ediciones B, Larousse, EDAF or Proteus joining us with their bestselling and back catalog content.

We have around 2000 commercial titles, mainly in Spanish. The second language is English (as I said, we just recently started to talk to UK publishers) and then a few in other languages, like Italian, Portuguese or dutch, where we act more reactively.

What we are seeing is that (1) it is not easy, (2) it takes time and "creativity", but (3) it is possible. Publishers *overall* might feel reluctant, but there’s been a huge switch of many of them during this last year. Again, this takes time and resilience and "evangelization" on our side, but what we are achieving in Spain makes us feel quite confident on the possibilities a subscription service like ours can provide to the publishing market and specially to the digital readers.

We’re in the middle of a growth process that will enable us to increase the size of the company, and therefore be more aggressive in our three main "legs": product (having a bigger product team that enables us to improve our apps), content (by deepening our relationships with Spanish and UK publishers, and opening partnerships in other countries if it makes sense) and marketing (we’ve been extremely effective by spending zero EUR )

Our service has been available on browsers from day 1, and we also provide an HTML5 version of our browser app for mobile and tablets. So we’ve bet on that area from the start. Re: Facebook and other platforms, we clearly foresee being there as well. As Social Media Marketing 101 says, you need to be where your users are! By growing the team a little we will be able to provide new readers in more platforms.

The four founders (Aitor Grandes, Angel Luengo, David Sanchez and myself) used to think of moonlightning projects we could do outside of our job at a B2B software company.) The idea of a "spotify for books" came up and, after checking that it didn’t exist but that it was part of the discussion inside of the industry, we decided to go for it!

Not really. There were many questions about that at the beginning, but we’ve shown how secure our service is, and how having a local version of the epub with DRM will always be less secure than a cloud-based reader. The due diligences we’ve already had with publishers and investors have always been successful, and we are constantly improving our mechanisms.

We’ve always had a straightforward view in our approach to the discussions about piracy. If you offer users/readers a compelling service at a reasonable price point, most of them will be absolutely happy to pay for it. That’s been our focus from the start.

24Symbols is a Madrid based startup which launched in July 2011. They started with an iPad app which offered access to public domain content on a subscription basis, and over the past 10 months they’ve released an iPhone app, signed up publishers, and started offering their cloud based platform as a service itself.

They pay publishers 70% of their revenues. A publisher’s share is based on the number of page views as a fraction of the total number read by all users. Publishers can include their books in both the free ad-supported area of the site and in the paid area or can limit them to either one of those.