4 Reasons Not to Pre-Order the Surface Tablet 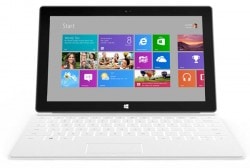 So Microsoft has just announced the prices for their new 10″ Surface tablet. This baby is running Windows RT on an NVidia CPU with either 32GB or 64GB of Flash storage. It’s priced at $499 to compete with the iPad and in some ways it even beats Apple’s crown jewel.

As great as this tablet might be, I’m not going to get it right away. I know I have a reputation for coming up with a reason to not get whatever device was just announced. This is not one of those posts. Instead, let me share with you 4 valid technical reasons not to rush out and $500.

Snide comments about Microsoft aside, my past experience with MS products has shown that you should always wait until they’ve released the first major update for any new version of Windows before using it. This saved me the headache of using Windows XP until 2005, and it kept me from using Vista entirely (Win7 was the major update).

While I am pretty sure that MS has already handed out review units, no one has said anything yet. We don’t have any real info about the hardware, software, or how well the device is put together. And no, the milliseconds that each blogger spent with the Surface tablet at the launch event months ago isn’t enough to tell us anything.

One of the downsides to Windows RT is that the Reduced Technology requirements come at the expense of software comparability. So far as I know you cannot run Win7 apps on Windows RT. The same goes for apps written for any earlier version of Windows. That means that the thousands of existing apps, including the dozens you are using now, can’t be used. The selection of apps is gong to be darned limited.

Sure, we’re probably going to see a bunch of companies announced apps for Windows RT late next week. But I want to see the announcements first, and I also want to wait until the bugs are worked out.

Call me a pessimist but I am still waiting for the other shoe to drop. This is a totally new OS and a totally new set of hardware. What don’t we know yet? There’s bound to be some unknown downside to Windows RT; I want to know about it before I buy.

Don’t get me wrong, this is Windows and the Surface tablet is pretty close to the ideal tablet convertible concept which I have been wanting for years now. I expect to buy one eventually, but I am also cautious about putting down $600 for something which might not work out.

There are going to be other Windows tablets coming this fall, including at least one from Microsoft. For all I know that one might be better.

Here is a 5th reason: you already own a Android or Apple tablet and don’t really need another.

Notice their answer on resolution in the reddit AMAA

What’s the catch? Can you say Zune?

I don’t see any reason to get an RT version of Surface until all my XP apps have RT versions. I am still interested in Surface Pro — but the rumored $899-$999 price might put me off that.

My instinct with the RT version is that people are going to wind up saying, "This is a great tablet. But you can’t do anything with it. Yet."

How many months will that "Yet" extend to?

Depends on how much you use MS Office. For many people, Office + email + web surfing = PC.

I also have zero interest in the RT version, but would love the Pro version. Yet, that predicted price is a bit too steep for me as well…

It looks like a lot of XP and Win 7 programs are never going to have versions that will run on RT. Making apps for the interface-formerly-known-as-metro has a few requirements that make high-end programs difficult. For example, Win 8 apps must be able to start in 5 seconds on an old Atom processor. Then Win 8 apps can only be sold through MS, no sideloading. I think a lot of programmers are going to stick with the older Windows APIs, and make programs for Win 8 Pro only. A lot of the RT apps are going to be conversions of Android and IOS apps.

I’m not buying a Windows tablet and will likely stick with Windows 7 on my computer for as long as humanly possible. Win 8 does not look promising.

And these RT tablets are supposed to come with "secure boot" "trusted signature" locked in, with no possibility (MS hopes) of unlocking the hardware. If you thought 'Amazon lock-in' was annoying, wait until you see Microsoft’s version. I do wonder how long it will take to break UEFI on ARM-powered tablets. I’m betting it will take some serious hardware hacking with JTAG connections…

That’s ne of the things I heard, yes. I want to get more info from real users before I do anything.

This is the tablet I have been waiting for. Multi-touch is the future of computing. Any app developer who isn’t already working on Windows RT (QT framework, are you listening?) are going to be left in the dust. Apple proved touch is an amazing new world. Google is demonstrating how useful mobile computing can be. But Surface provides a whole new world of mobile app potential. Plus it interfaces with more stuff than the others combined. Yes, MS is years beyond Apple in terms of its mobile ecosystem. And people dislike the "store" aspect of the new Windows RT — everybody wants open distribution. My take: wait and see. The one thing MS did NOT want was a bunch of poorly-designed 3rd-party apps that clash with the ARM processor and bring the Surface hardware and software to a screeching halt. For now, a Store is the way to go. Long term, we shall see.

"… So Microsoft has just announced the prices for their new 10? Surface tablet. …."

Actually, they have not completely announced the prices for Surface. There are two 10″ Surface tablets.

Almost every one of these 4 points is why the Windows 8 version might be a better option. If primarily desire a Windows tablet to run legacy Windows apps alongside RT oriented apps then the second one is probably the one you want. It is going to be more significantly more expensive.

However, 3 months after late October is in 2013; not this Fall. There will be other vendors with x86 offerings this Fall; but not Microsoft. Microsoft needs to walk before it runs when it comes to selling person computers.

The RT "Window 8" apps shouldn’t be an issue for long because those apps will run on Windows 8 (on intel) also. You’re not putting the deployed ecosystem for those apps into perspective. Once Windows 8 launches *all* the new personal computers (tablets and legacy form factors included ) are platforms to run those apps on. It is not limited to the ARM sub-segment of the market.

That’s why the new RT API is new. Microsoft wanted a new API that would allow them to couple their ARM offering to the inertia that Windows has that is designed for multi-microarchtectural platforms and form factors. That coupling should move both forward. The API reset also allows large numbers of smaller developers jump into the ecosystem without fear that the large players will just steamroll them with their established legacy inertia.