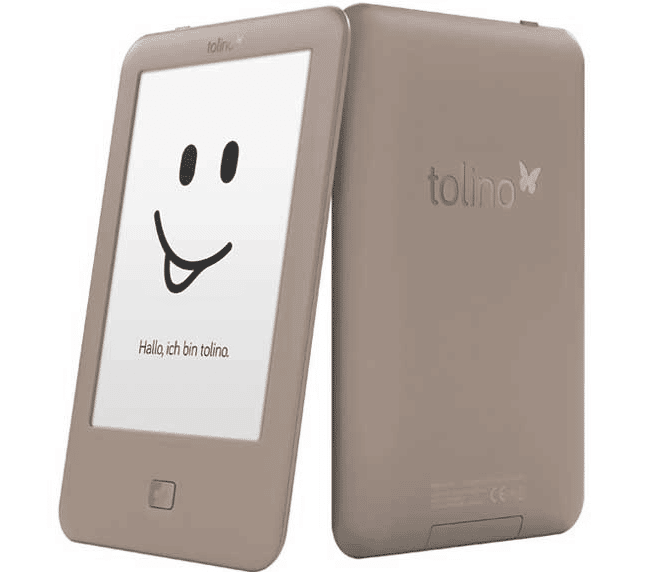 For the past three years the German ereader maker Tolino has been competing with Amazon’s Kindle by offering mobile apps, selling ebooks, and supporting one or more mid-market ereaders.  Today Tolino went after the budget ereader market.

The Tolino Page is a 69 euro ereader with limited storage and an IR touchscreen but no frontlight. 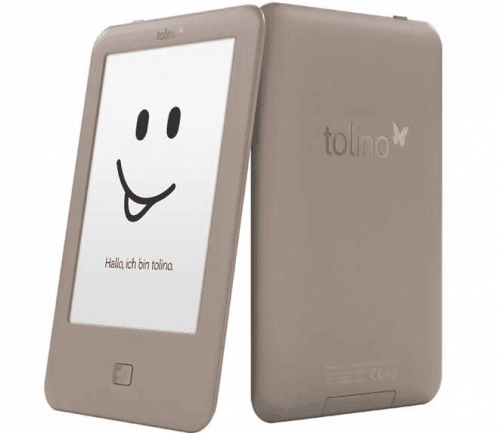 The Page costs the same as the recently launched white basic Kindle, and in order to get the price down Tolino used a screen and more limited hardware on par with the Kindle’s.

The Page has the same dimensions as other Tolino ereaders, and it features an 800 x 600 resolution E-ink screen, just like you would find on the basic Kindle. According to AlleseBook.de, the Page runs on a 1GHz Freescale CPU with 512MB RAM with  2GB of storage, a microSD card slot, and Wifi.

The Page a much more basic ereader than the original Tolino ereader, the Shine, which launched in 2013 and cost 99 euros. The Shine had a front light and a higher resolution screen, and ran a slightly older version of the same software, so if you can find the Shine in new condition in the discount bin I would seriously consider buying that instead.

If not, the Page is now available at eBook.de and other sites.

A Different Take on That Amazon Studio Arrangement Patent

Too bad they didn’t go for XGA resolution. The lack of a frontlight shouldn’t be that much of a problem, considering the Carta display. Bluetooth should also have been in. This basic model is too basic. It only exists in order to be Kindle alternative without distinguishing features worthy of being called such (the microSD support alone is too little). A pity, since this is in spite of a number of people who wish there was a reader without a frontlight and without capacitive touch to replace their PRS-T3 (but then again, the lack of a sufficient number of physical buttons would most likely still keep them away from this device). IMHO, there’s still no good low-end, low-budget reader (read: less than 50,00 EUR/USD) in the market at present. Also, I’m not aware of current devices à la Pyrus mini. Where are they? This one is too low-end for the price but too pricey and featureful for a low-end, low-cost reader.

"The Page costs the same as the recently launched white basic Kindle, and in order to get the price down Tolino used a cheaper screen and more limited hardware."

The way that you wrote this made it sound like the Tolino uses a cheaper screen and more limited hardware IN COMPARISON TO THE BASIC KINDLE. That’s not what you mean right? You mean in comparison to other Tolino models.

Curses! My secret plan to subtly denigrate non-Kindle hardware has been foiled!

I bought the Tolino Page last week for 65 Euros. Basic indeed. But not bad for epubs. My complaint is that it takes an ugly second to render the books and the PDFs have to be "extracted" each time, settings are not remembered. The Nook Simple Touch, which came out in 2013 is, in my view, a better product only because the PDFs render very well. The Tolino page is not bad so I’ll use it for now.

Tolino Page is a piece of junk! Don’t buy it. I had to return two models. The cheap plastic housing is so frail and rickety that it breaks after a short time. This was made to breakdown. It was a throwaway model to bring in press for the company’s more expensive items.