Amazon Books is a Utilitarian Threat to the "Heart of the Book Industry", One Indie Bookseller Claims 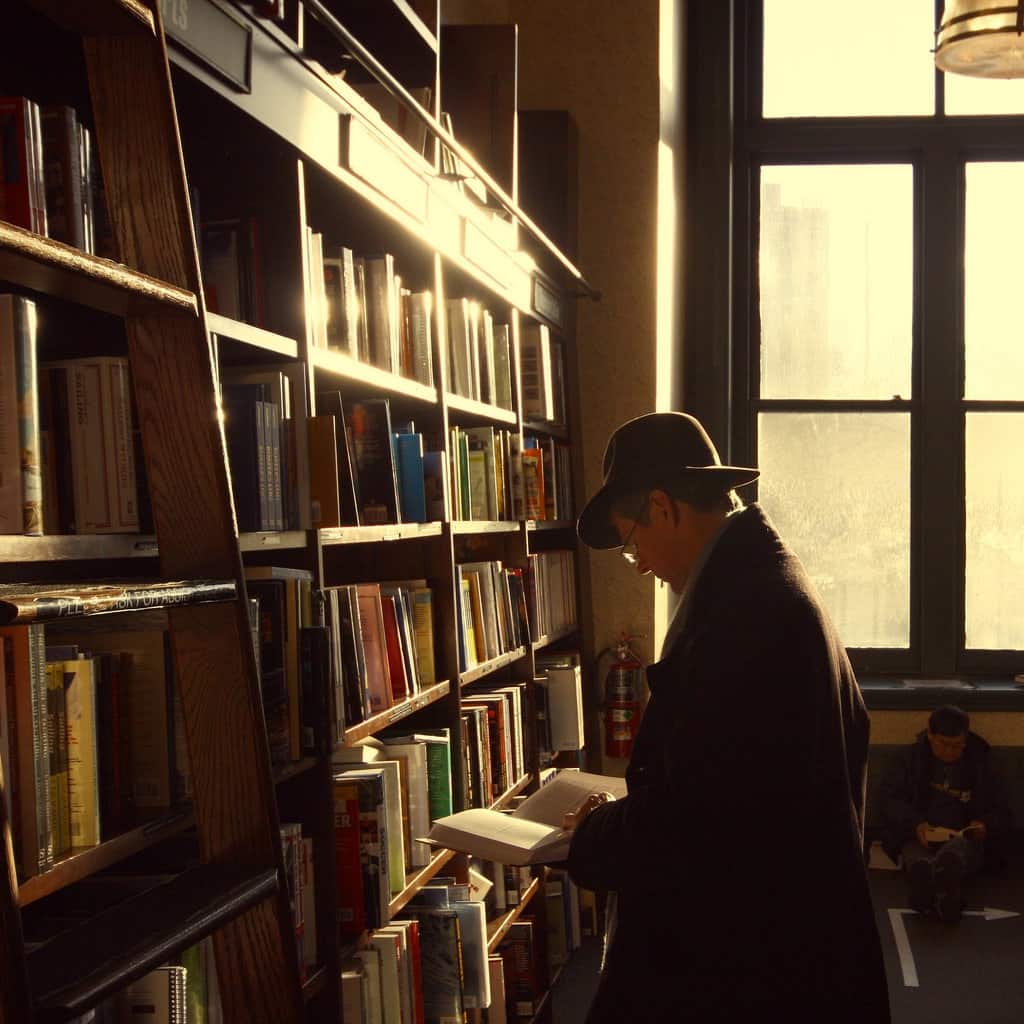 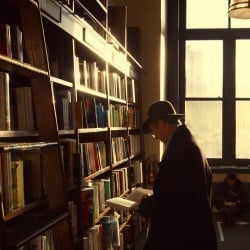 When one is confronted with a harsh truth that attacks one’s identity, it is not uncommon to bristle defensively and respond with arguments that explain (to the arguer, at least) why the truth is false.

And now the Seattle Times has given indie bookseller Indigo Trigg-Hauger a platform to complain about Amazon:

But places like Third Place Books, The Elliott Bay Book Company and my own place of work, A Book For All Seasons, can never be replaced. The experience of an indie bookstore just can’t be bought.

People won’t go to Amazon’s bookstore for enjoyment. The model is utilitarian, impersonal and cold. And with the rise of Amazon’s Kindle, customers risk losing contact with the heart of the book industry.

At your local independent bookstore, we want people to browse on their own time, on their own terms. We have recommendations scattered throughout the store — but that’s not why you come. You come because you want to make a discovery, one that will be your own.

Why would I go to a bookstore where all the work has been done for me? People are unique. We don’t want to feel like another data point, another sale in the machine that tells the company how many books to buy. Indie bookstores also use sales data, but we leave ample room for experimentation and improvisation. If I remember an amazing book from my childhood that I think we should carry, I can tell my boss. We have the freedom to experiment, which means our customers do, too.

Being in a bookstore is not supposed to be a quick and easy clinical process. But that is what Amazon has erected.

My problem with that piece is that it makes many assumptions about Amazon that stem from a romanticized view of bookselling which are then filtered through an indie bookseller’s understandable dislike for its largest competitor.

For example, Trigg-Hauger looked at the following and called it "utilitarian, impersonal and cold": 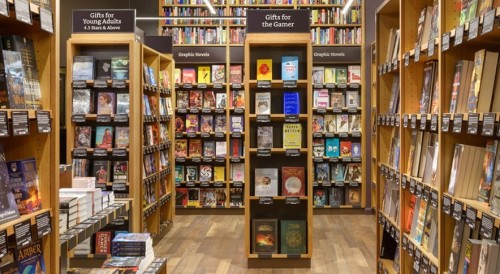 That doesn’t strike me as utilitarian or cold; where’s the bargain bin? exposed concrete? cheap lighting? (There’s a shortage of cats, but that’s a separate issue.)

I haven’t seen any of those things in the photos taken in Amazon Books; did I miss something?

Furthermore, I’ve been following the coverage of Amazon Books closely, and so far that coverage has failed to convince me that Amazon doesn’t "want people to browse on their own time, on their own terms", as Trigg-Hauger would have you believe, or that if I went there "all the work has been done for me", leaving me no way to browse the selection and discover a great read.

I wasn’t aware that Amazon had a countdown timer or anything like that on their product pages, or that they kicked people out of Amazon Books if you browse for too long; does anyone know of a report that corroborates the claim?

And while we’re on the topic, has anyone had Amazon decide which books you’ll buy, and then bill you and ship them without your permission?

Hell, has anyone had an experience in Amazon Books that even vaguely resembles Trigg-Hauger’s tale?

The other problem is that not all independent bookstores are organized, clean, nurturing places devoted to the furthering of literature and embracing readers off all stripes. I’ve had plenty of bad experiences in bookstores. They range from used bookstores that are so dusty, filthy and disorganized they are clearly owned and run by people with hoarding issues, not people interested in selling books. Then there are sweet little boutiques that appear to be run as a hobby and are more interested in selling nicknacks than stocking books people might want. Then there are snobby bookshops that refuse to sell graphic novels or sci-fi. Etc.

On top of all that, one of the most amazing disconnects is that many independent bookstores make a policy of not carrying Amazon’s publishing imprints (and generally being unwelcoming to self-published books). Now, where did anyone think that was going? That Amazon would quietly fold in the face of this boycott? Or that Amazon might try to find ways around the independent stores?

I retired to a small town (population 3000) in rural Arkansas that has no book stores at all, and I don’t have a car so I can’t go to the bookstores in Little Rock, 50 miles away. Thankfully I have Amazon!

I spent most of my life in Houston which is full of bookstores of all types and sizes, new and used, independent and chains. I’ve always spent a lot of time in them and thoroughly enjoyed it. I’m very much a fan of bookstores.

When I first retired I spent at least 3 days a week, often more, in Borders and B&N, buying their coffee, sitting in an easy chair and reading their books. I bought enough books that I didn’t feel the least bit guilty about that and the store clerks never seemed to mind even though I’m sure they knew what I was doing. I do love bookstores, and at 75, I’ve probably spent more time in them than most.

Now I have Amazon and I do agree with the article writer that that’s not quite the same thing, pretty much in the same way that a Kindle isn’t quite the same thing as a paper book. But "not the same" doesn’t mean "less". I spend time browsing for books on Amazon at least a little bit every day and sometimes a lot.

The thing is the environment of a book store tends to be kind of special. All those rows and rows of books are delightful. At Amazon I don’t quite have that. The books are there but the bookish environment isn’t. Nor is the smell. And yet, browsing, discovering new books, discovering new authors, is far more efficient and satisfying on Amazon and the results are often better. And Amazon has a very nice feature that the bookstores don’t have: a watch list. If I see a book at a bookstore and I think I might want to read it but I’m not really sure I better buy it because it might not be there next week. At Amazon I can simply put it on my watch list and be pretty sure it’ll be there next week; next month; next year.

I don’t think that guy said, at least in the part you quoted, anything I can disagree with exactly. At the same time I do agree that he’s blown little things way out of proportion and ignored the benefits of Amazon. I’m pretty sure the buggy stores probably said similar things about the early auto stores.

Thomas,
I agree with you that the dusty hoarder’s bookstores are among the best. I always made it a point to search out such stores and browse in them.

I don’t know that I would call a hoarder’s store the best, but I do like digging through their clutter just to see if I find something new.

I’ve posted below my comments to the same article on the Passive Voice:

I used to read paper books, back before a better alternative came along. I used to frequent bookstores, Indie and otherwise. Before the need vanished and most of the World’s books became available from my notebook. And yes, of course I was looking for that great read, that treasure amongst the dusty, allergen-ridden shelves. Before the much more effective alternative that Amazon offers came along. I am far more likely to discover that treasure, one that may be a treasure only to me, on Amazon.

As I replied to a similar piece on Mobileread, if you value the whole experience, the tactile and olfactory and refractory and that ill-defined ambiance, you can still have it, and will continue to do so as long as a sufficient number of people feel the way you do. I don’t begrudge this to you. And whilst Amazon would no doubt like your money, I doubt it does either. Personally I place no value on the experience that to you is priceless, and can now avoid it. Great! Vive la difference!

Amazon is Making Their Bookstores a Priority, and Are Now the Fourth Largest Bookstore Chain in the US | The Digital Reader June 25, 2020 um 7:39 pm

[…] For the first year or so the announcement of each new Amazon Books location drew complaints from local booksellers, and after the first location opened in Seattle, the ABA started muttering about […]