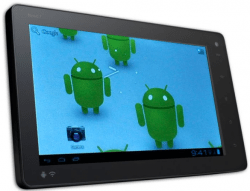 The Aino Novo7 is based on a 7″ capacitive touchscreen, and it’s running on a 1GHz CPU with a pair of cameras (2MP rear and VGA front), HDMI out, a microSD car slot, and Wifi. It can d0 1080p video decoding using its GPU clocked at 444MHz.

This tablet has actually been around the block a few times. I’ve never seen one, but I’ve heard that it was released some time back running Android v3.0 Honeycomb. Today’s launch is really more of an update to the device, not a new tablet.

Now, lots of people will talk up this tablet because it’s running the latest version of Android. True, ICS adds a number of nice features and I’m looking forward to eventually seeing it. But I don’t care if I see it on this tablet.

This is another tablet coming out if China, but that’s not the problem.  I have bunches of those and they can be worth the low price tag. No, my reasons for suggesting that you avoid it are very simple. I’m worried about the CPU.

Nearly all Android devices run on an ARM CPU, but the Nova 7 has a MIPS CPU. The specific differences aren’t important,  but this is: apps written for one CPU won’t necessarily run on the other. And I’ve already seen this issue with Android tablets.

Some time back Brad Linder, the editor of Liliputing, reviewed the Skytex Primer Pocket. This is a budget Android tablet with a 4.3″ LCD and running Android v2.2 on a MIPS CPU. Brad found that a lot of apps which were supposed to work on that version of Android wouldn’t.  He reported that 75% failed to install.  Yes, 3 out of every 4 apps he tried to install failed.

Update: Guess what, I was wrong. It looks like the CPU wasn’t the only cause of the app incompatibility. One reader pointed out that the Cruz Tablet is also running on a MIPS CPU and it doesn’t have nearly as many app issues as the Skytex Pocket Primer.

You’d expect any app that uses native code to fail. That’ll be a lot of them, 75% wouldn’t surprise me at all. It’s interesting because Google is pushing its NDK (Native Development Kit, obviously ARM-centric) while at the same time touting e.g. x86 builds of Android.
At this point I’d say that Android is stuck with ARM because of the apps. The only way to run apps with native code is to emulate an ARM on your actual processor, and as we see from the Android emulators Google makes, that’s too slow to be usable.

75% is extreme, especially as the NDK increases the complexity of your software. Combining that with the wide range of Android platforms (not all ARM processors are the same), it would shock me.

Briefly scanning x86 Android and Cruz Tablet reviews, Angry Birds is often the only application noted to fail (although Firefox is one other). The linked review indicates Aldiko won’t run, but many others appear to be happily running Alidko on MIPS.

I tried finding a list of applications using the NDK, but it seems to be so rare that no one has bothered. According to a MIPS presentation, Angry Birds only uses the NDK so that they can share code across the huge number of platforms they support. In other words, they wrote their own, non-Android API to develop against. MIPS also states that Rovio was able to port their application to the MIPS platform in eight minutes.

I didn’t know that the Cruz tablet had a MIPS CPU. You’re right; it doesn’t have nearly as many complaints as the Skytex pocket primer. In fact I’m having trouble finding any.

Thanks for catching that; I’m going to have to fix the post.

Just to be clear, it is only the older pre-T408 Cruz Tablets that have MIPS. Still, my point stands that the NDK is not quite the virus it is made out to be.

Thanks for the update, Nate.

Actually, I will always think of just the original as the Cruz Tablet. It got the name back when there was just the 2 models. After that they got model numbers.

And I’m glad someone cared enough to tell me I was wrong before too many experts saw my mistake.

Interesting indeed. I’m biased because 100% of the Android projects I’ve worked on have used the NDK. Both of them! (The reason was so we could use open-source C code to provide large parts of the apps' functionality).
So why would apps fail? RAM limitations perhaps?

Rob, do you develop in-house applications or Google published? If Google published, then you can specify in the Market when publishing which CPU platforms your support? Do you have problems running on different variants of ARM (e.g., ARMv4 vs. ARMv7)?

Applications could fail to install for a number of reasons. Non-standard filesystem layout, cache partition too small, device too slow during install, incomplete system support (failure when querying IMEI seems to be a big one). That’s ignoring all of the other crazy things these cheap manufactures may have done.

I’ve worked on DroidReader, a PDF reading app that’s currently in hiatus. Also an app that’s in Qt using necessitas, which hasn’t made its public debut.
It’s kind of scary thinking about the variation in platforms, as it implies that releasing something publicly will incur a torrent of support requests!

Hmmm, I was just looking at some videos for this on YouTube (2/13/12). I decided to see if you had also mentioned it, and here it is. Another budget tablet to avoid.