A Different Take on That Amazon Studio Arrangement Patent 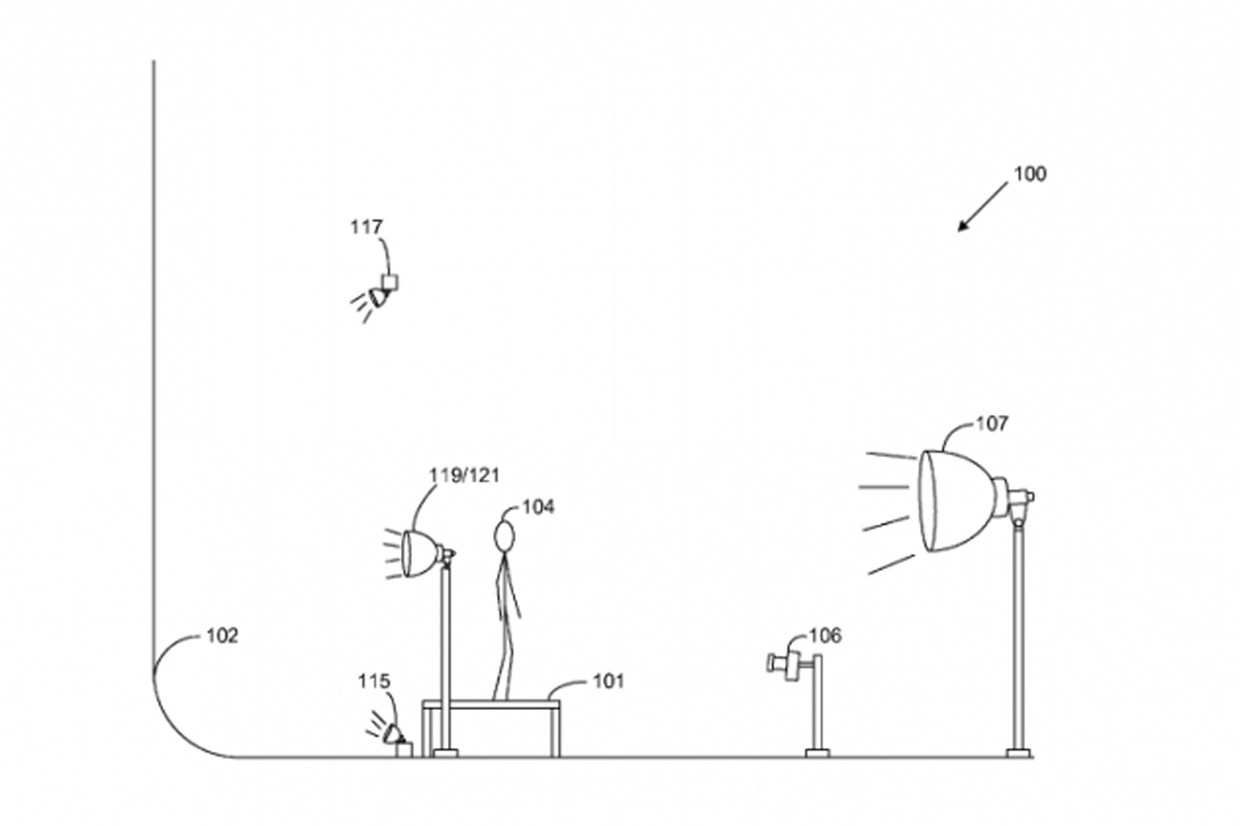 When word got around a couple weeks ago that Amazon had received a patent for an obvious photography studio trick, many bloggers had fun heckling Amazon (for filing) and the US Patent Office (for awarding) a patent which documented a trick that photographers had been using for decades.

Amazon’s patent covers a process for taking a photo against a white background with the goal of reducing the number of shadows and other blemishes in the resulting image. This is an old photographer’s trick which  is so well established, as some have pointed out, that you can find how to guides and demo videos online which explain the steps involved.

So this patent is clearly a strong argument for patent reform, right? Amazon has patented the digital photography equivalent of sliced bread, right?

Rebecca Allen, posting over on her blog, writes about her take on the patent.  She read it and concluded that it is something new:

Here’s what the patent is: set up your studio like this and you will have a photo of a subject that is brightly lit with no shadows (actually, there’s usually something below the feet, if it is a human model standing, but why go there?) and a completely translucent background without having to do ANY post-processing whatsoever. Everyone invoking photography and studio set ups from before the digital era has Comprehensively Missed the Point.

So why would Amazon want this and why wouldn’t everyone have already figured out how to do this? You can tell that people _had not_ figured out how to do this, because it is Dead Easy to find people asking how to avoid, minimize or expedite the post-processing hassle of removing shadows and lines and so forth and getting answers that focus on making the PhotoShoppery easy and effective vs. avoiding it entirely. R. is able to find both film (the crazy awesome wonderfulness of Elsa Dorfman) and digital photographers who have gone a long way down the all white background/brightly lit path, but it is stupidly easy to play Find the Shadow/Detect the Light Source. (Remember: I’m not a photographer, so if I can do this easily, it MUST be stupidly easy.)

… Why did Amazon do it? Two reasons: it’s incredibly labor saving (cheap!) once the hassle of setting up the studio is amortized over millions of photographs. And it creates a Look without looking like it is a Look. The Amazon item photo is unbelievably recognizable, but you probably never even noticed that.

One could argue that a common trick like this is too obvious to deserve a patent, but I think that misses the point. This is a trick which photographers are trying to perfect, and one which everyone shares tips online. If this were obvious then there would be no need to share tips online.

In short, Amazon has a patent on perfecting a trick that photographers have struggled with for decades. Amazon might not be the first to get it right but they are the first to document their success.

And for that, they got a patent.

I cannot understand what Amazon is trying to achieve with that. Patents means lack of prior arts, and there are thousands of past photographs that may have used this simple method. There are loads of books and blogs about lightning for movies and pictures, it’s practically impossible for this light setting to be unique to amazon and litigation-proof. It could even backfire if a photographer with prior art sues Amazon…
If it is to get a commercial advantage over its competitors, by having nice and easy to pull pictures for models and products, it does not hold as the patent is easily enough proven invalid.
So, I cannot understand what Amazon is trying to achieve with this lame patent. In the end, it’s probably not about innovation and photographic methods, but about litigation…

It might be that they want to protect themselves. We live in a time when patent trolls roam the earth, so it makes sense to protect an important business process like this.

Or the employee filed to get a bit of cash.
Companies award bonuses to their inventors so the rule of thumb is that anything that might be patent worthy gets submitted.
At least these folks submitted something they actually built and use.

No, patents don’t mean lack of prior art.
Patents mean nobody has achieved the same thing the *same way*.
For example, Nintendo got a patent for a cross-shaped 4-way digital pad on game controllers.
Sony achieved the same thing with 4 separate buttons arranged as a cross and Microsoft went with an 8-way pad with a cross-shaped overlay.
Each deserving of a separate patent.
Different solutions to the same problem are patentable; otherwise, nobody could design their way around somebody else’s patents.

The only question the patent office needs to answer is whether or not somebody has previously solved the same product the same way, with the same arrangement of lights, reflectors, etc. And documented it.

If somebody can document that the problem was previously solved in (substantially) the same way, then they can challenge the patent. Otherwise…

fjtorres I understand that for something to be patentable, it also needs to be non obvious and novel
(http://www.bitlaw.com/patent/requirements.html).

But sometimes, one wonders how some patents are even delivered…

"This is a trick which photographers are trying to perfect, and one which everyone shares tips online. If this were obvious then there would be no need to share tips online."

Sweet. So even though there’s all sorts of how-to guides for how to make a PB&J sandwich online and the items themselves have been produced for decades, I’m going to go ahead and patent it because my version (while functionally exactly the same) is "perfect".

You can go ahead and start mailing me your royalty checks.