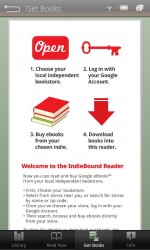 I got a tweet last night from one of the folks behind Bluefire. He was pleased to tell me that the app he had helped make for the American Bookseller Association was now available the Android Market.

The ABA released this app as part of their IndieBound program. This is a several year old effort from the ABA that helps independent bookstores build their local community. The program has grown to include an ebookstore component, but it’s important to note that the IndieBound apps do more than just read ebooks.

For example, the IndieBound iPhone app has actually been around for a couple years now. It odes not appear to have been updated to be a reading app yet, but you can currently use it to track lists of books that you want to buy as well as find your local ABA member bookstore.

The Android app doesn’t appear to have the same features as the iPhone app, unfortunately. But it does read ebooks, so what it lacks in one feature it makes up for in another.

BTW, the ebookstore component is also known as IndieCommerce, but from the outside it appears to be 2 parts of a whole. IndieCommerce was launched in December 2010, and it enables ABA members to sell ebooks on their websites. Most of the ebooks are provided via the Google eBookstore. (Ebooks are also supplied by Ingram Digital, but most of the attention goes to Google eBooks.)