About Those 6 Million Kindle Fires Sold 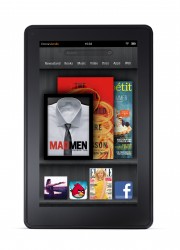 There’s a story going round today that one analyst has bumped his estimate of the number of Kindle Fires sold. Stifel Nicolas analyst Jordan Rohan’s tea leaves have shown him that Amazon sold 6 million KFs, not 5. He also increased his estimate of Amazon’s revenues by $2b, to $67 billion.

That’s interesting news, yes, and I would bet that he is close to being right. (Last week’s Flurry stats certainly agree with this estimate.) But what’s more interesting is that he preempted Amazon. Amazon is due to announce their financials tomorrow, and he just may have stolen their thunder. But maybe he didn’t.

This bit of news today might inspire Amazon to release real numbers tomorrow on how many KFs they sold. That would be a first for Amazon, yes, but just think. What if Amazon sold 7 million Kindle Fires last year. Wouldn’t they want to take the opportunity to surprise everyone?

On the other hand, they might have just barely hit the 6 million mark (or maybe even fallen short), and that might be enough to discourage them. "Meeting expectations" is not enough anymore, so today’s news might preclude tomorrows.

In any case, tomorrow’s news is then one to pay attention to. Today is just tea leaves. Let’s see what happens.

National Geographic Magazine is actually better on the iPad than paper

AAR Joins the Fray in the Amazon-Hachette Contract Dispute

One thing to beware with these estimates is that FIREs have not sold out.
They have always been available.
So if their factory orders ran 5-6 million, it is doubtful they sold six.
Now, if you add January sales then maybe…

But unless the eink Kindles didn’t sell at all, the million-a-week december brag suggests FIRE sold more like 4 milion than 6. Still ridicuously good (Nook Color sales for their first *year* ran around 800K) but not quite up to analyst hype.