2012 came and went I thought it was the year of the Android tablet, but it looks like I might have misjudged a bit.

Acer and DreamWorks (yes, the movie studio) have each revealed today that they’re launching tablets at CES 2014 next week. Acer’s tablets are fairly typical for their price range, but it looks like Dreamworks may have decided to dabble in a hardware/content bundle.

Acer has revealed that they have a couple 7″ and 8″ budget tablets in the works.  The cheaper tablet is about on par with what you can already buy for $99 or so, only now you can get one with a prettier shell and a better brand name on the case.

The Acer Iconia B1-720 has a 1.3 GHz dual-core CPU, 1GB of RAM, 16GB internal storage, and a microSD card slot. I don’t have any info on the screen resolution nor can I tell you the resolution of the single camera, but Acer is saying that this tablet has front-facing speakers (a big plus, IMO) 5 hours of battery life, and it will be running Android 4.2.1 Jelly Bean.

The Iconia A1-830 features a 7.9″ screen with the same resolution as the one on the original iPad Mini screen, a 1.6GHz dual-core Intel Atom Z2560 Clover trail+ CPU, 1GB RAM, 16GB internal storage, and a microSD card slot. This tablet has front and rear cameras (2MP and 5MP), Wifi, Bluetooth, and like its smaller brethren it will be running Android 4.2.1 Jelly Bean.

This could be the mid-sized tablet that sets the standard for the new year. Intel chips are usually significantly more capable than ARM chips, so I would expect this tablet to outperform other 7.9″ tablets in its price range.

But I’m not so sure how it will compete against the DreamWorks tablet.

The NYTimes is reporting that this movie studio is planning to launch a $300 Android tablet later this year. Details are less than complete, but I do know that the tablet will be based on hardware developed by Fuhu, the kids tablet maker. It’s going to be called the DreamTab. 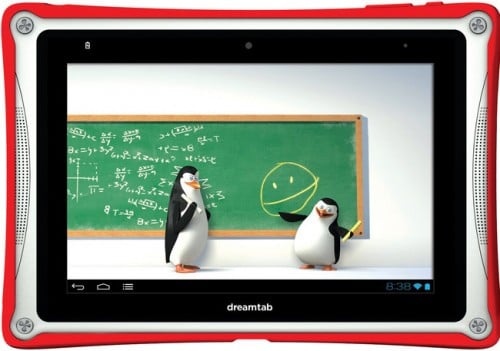 The complete specs have not been shared, but DreamWorks is saying that the first DreamTab will have an 8″ screen, front-facing camera and speakers, and will also have tech that enables it to communicate wirelessly with DreamWorks-made toys (NFC, RFID, ?). A second model is planned for later in the year (with a 12″ screen).

From the way they’re taking it sounds like DreamWorks sees this tablet less as a hardware venture and more as a distribution channel for their content:

Now DreamWorks has partnered with a technology company, Fuhu, on an even more immediate way to reach itty-bitty eyeballs, a highly coveted audience: a tablet computer for children that the studio will be able to program much like a cable channel. “We could push out a new character moment every day of the year,” said Jim Mainard, head of digital strategy and new business development for DreamWorks.

It will also feature custom software and will sell alongside a range of DreamWorks-branded accessories, including headphones, protective bumpers and carrying cases,

The Android on Intel stuff is interesting. I wonder who is doing the heavy lifting on porting and optimizing Android for that platform, Google or Intel? I also wonder how the developer tools and support compare. None of the ARM apks on Google Play will work on Intel, right? So what will the ecosystem look like? How many apps will be ported? Or will they go with universal binaries? Those would be double the size, though; not trivial for mobile devices.

It seems to me that Google is in a win-win situation here, but Intel has some real work cut out for them to become a real alternative to ARM in the Android market.

Also a win-win for consumers, though.

Actually, one of the nicer points about Android is that the CPU architecture doesn’t matter.There are tablets ith Mips, Arm, and X86 chgips and they can all run the same software – mostly. Naturally some devices will reject some apps but that has nothing to do with the CPU arch.

I can confirm this; I have an HP Mesquite and it has an Intel chip.

That’s interesting! I was basing my thoughts on desktop OSes (Mac Intel vs. PPC, Windows RT vs. 8, etc.) So it’s a pure shootout. I look forward to reading your reviews for the next year or so; Intel makes great chips, but will they match up with performance, battery life, and price? We’ll find out.

Fixed it. Thank you!