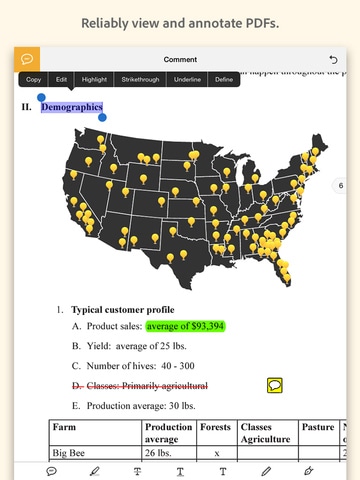 For the past several years Adobe has been bundling more and more paid services into its consumer-level Adobe Reader app, and today they finally erased the last distinction between the two apps.

I got an update notice this morning for the Adobe Reader app on my iPad. Apple wanted me to update the  app to a new one called Adobe Acrobat DC (iTunes). I’ve spent a few minutes using it both before and after the update, and I can report that it is largely the same app.

The new Adobe Acrobat DC app has a different interface and organizational schema,  and it’s both faster and smoother, but if not for the name change you would think the app had simply gotten a major update.

Speaking of updates, Adobe has also updated the Adobe Reader apps for Windows and other platforms with the new branding. This includes the Adobe Reader app for Android. Also, The Next Web reports that the Windows 8 app now has a new touch-friendly interface. Not having a Windows 8 device, I can’t confirm that detail.

Like the old Reader app, the new Acrobat DC for the iPad lets read, edit, create, store documents in the Adobe document cloud (DC), and import/export. And like the older app, Acrobat DC requires you to pay to use most of the features. Everything except reading and exporting a PDF will cost you money, and the prices are too dear for this consumer.

The paid services cost either $10 a month (and up), or you can get lifetime subscription for $299 plus. As with a lot of their products and services, Adobe is focused on corporate and business customers, not consumers.

That’s okay with me; I was happy paying $5 for Goodreader. That app might not carry the Adobe brand but it fills my PDF needs on the iPad.

And when Goodreader comes up short, apps like Dropbox and Microsoft’s new Office Lens app for iOS should fill in the holes.

What can I say, my mobile needs are modest.

Okay, I was wondering what was up the android update of this app on my phone this morning. Thanks Nate!

Now I wonder how much longer until adobe goes full subscription with ALL their products. I think photoshop & premiere elements are among the last holdouts.

Did they hit the Android app as well? I didn’t think to look. Thanks for the tip!

And I thought Adobe already offered subscription options for all of their products? Did I miss something?

As far as I know: lightroom, photoshop elements, and premiere elements (stripped-down versions of their namesakes) still exist outside the creative cloud subscription.

Not sure if there’s anyone else, but those three I’m familiar with.

Lightroom is part of the 'Photoshop' subscription ($9.99/mo).

Full circle.
Adobe’s free pdf reading app was called Acrobat from day one and it was intended to induce people go buy Full Acrobat, the creation and modification tool.
It was only later that the freeware version got renamed to Adobe Reader.

Presumably, they intend to reserve Adobe Reader for the newer releases of the epub reader app.

Based on the google play feedbacks, file explorer capability was dropped in android, you have to use a separate file explorer app to open locally saved PDFs.

Well that stinks. It also strikes me as a good reason to use another PDF app to open locally saved PDFs.

By the way, I believe PDF cloud storage is (still) free when using the mobile apps, unless you want to use that on the desktop. Then you need to pay for Acrobat. Not sure where the Windows app fits into this now, since Windows can be 'mobile'.