A bunchaton of smartphones are being unveiled this week at IFA-Berlin, and one in particular caught my eye.

The French smartphone maker Alcatel has just announced a new 6″ phablet, the  One Touch Hero. If the product renders are to be believed then this will be a pretty phone, but what caught my eye were the cover accessories.

This smartphone is going to offer several optional cover accessories, including a wireless charging cover, a MagicFlip cover with LED notifications, and an E-ink cover. I don’t yet have the specs on the Eink screen but Alcatel has teased us with this image: 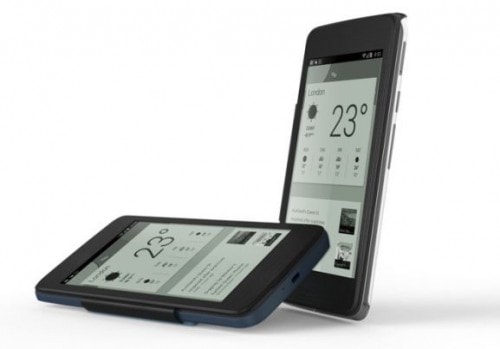 This phone is going to run Android 4.2 when it is released later this year. It’s an upgrade to the One Touch Scribe and in addition to the larger screen the One Touch hero also has a faster 1.5GHz quad-core CPU with 2GB of RAM, a 13MP rear camera, a 2MP front-facing camera, an optional pen, and either 8GB or 16GB Flash storage.

The One Touch hero is expected to ship in October with an undisclosed price tag. Alcatel will also sell a Bluetooth phone accessory (much like the HTC Mini+), a TV Link video adapter and a pico projector that doubles as a stand.

[…] Hoffelder at The Digital Reader writes of “Alcatel Unveils New 6″ Smartphone With E-ink Cover, Pen Input“. I love the “optional cover accessories, including a wireless charging cover, a […]

[…] offer an E-ink screen feature similar to the Yotaphone, including ones from Gajah, Pocketbook, and Alcatel. The Gajah case should be on the market by now, but it is only available in […]

[…] Alcatel announced the  One Touch Hero smartphone a couple weeks ago everyone wrote about the E-ink cover accessory but no one had photos to show off – not even me. But […]