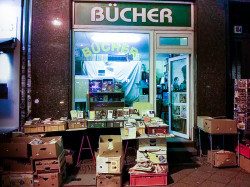 A group of authors in Germany will be publishing an open letter next week, condemning Amazon for acting like a business.

The letter makes accusations similar to the points raised by Authors United in its NY Times advert. More specifically, the German authors accuse Amazon of manipulating recommendation lists and delaying the delivery of books.

Update: Boersenblatt has posted the text of the letter. it is in German, of course, and it is very similar in tone to the open letter from Authors United.

The news of this letter is just breaking today, so I can’t verify any details which they might have to back up the claims, but it does appear that this group has broad support.

"We need to educate the reader that the manipulation of recommendation lists and the delayed delivery of books whose publishers fight back against Amazon, the Amazon include everyday," said Regula Venske, general secretary of the PEN Zentrum (the German chapter of Pen International, a writer’s association).

Amazon is in conflict with publishers in Germany similar to their ongoing contract dispute with Hachette Book Group here in the US. News broke in May that Amazon was in a bitter contract renegotiation (or at least that is how it was framed in the leaks) with a German subsidiary of the Swedish publisher Bonnier.

According to German sources at the time, Amazon was seeking better terms for their ebook contract, and as part of their negotiating technique Amazon was reportedly  reducing the number of copies of Bonnier titles they carry in their warehouses.

I haven’t seen any new news on the Bonnier situation since late June, when the German book industry trade group Börsenverein filed an antitrust complaint against Amazon, alleging that Amazon was a monopoly. I’ve been told that complaint will likely go nowhere.

It’s not clear if the German authors have any evidence to support their claims, but if they do it will be a first. Amazon has been repeatedly accused of delaying Hachette titles and Bonnier titles as part of its contract negotiations with each publisher, but so far as I know no one has shown that the shipments have actually been delayed (as opposed to the items simply being out of stock). And as for the claim that Amazon was manipulating recommendations, I have never seen any evidence that was more substantial than industry gossip. (To be fair, those with first-hand info are probably not allowed to speak to me, a blogger.)

BookLive to Launch Lideo eReader in Japan Next Month

It strikes me that the core of the complaint here (much as in the Hachette kerfuffle) is that Amazon isn’t acting sufficiently like Amazon.

Anybody else remember when you could walk into your local Borders and they had hundreds or thousands of copies of pretty much everything available in print, ready to sell you and the staff would tell you that your favourite author had a new book coming out in four months and asked if you’d like to pay today and have it ready to be picked up on the day it was released? No? Me neither.

Keeping large stocks of books ready to ship and making pre-ordering quick and easy weren’t part of the fixed natural order; neither was deep discounting of books (although at least in this case we don’t have a company that engaged in an illegal conspiracy to artificially inflate book prices complaining that Amazon isn’t discounting their product enough).

Sure, back the bully since it isn’t beating on you currently. This isn’t about helping consumers. It is 100% about Amazon being Amazon — beating up suppliers for advantages over its competitors in order to push more of them out of business and consolidate its grubby, rapacious monopoly. And don’t think it’s just a battle against Hachette. Amazon bullies the 2000-3000 small and nonprofit presses, too, who are grateful that a big publisher is standing up to the Walmart of online retail. Anyone on the supplier side of of this issue knows that Amazon lies to and bullies suppliers. We fear them. Consumer should consider whether a $5 discount today is worth creating a monster that may turn on them tomorrow.

Just because I didn’t take the authors' side doesn’t mean I am taking Amazon’s side.

I was going to defend my post and say that bogus claims like "Amazon delays shipments" annoy me, but as I read this post again I can see that the post is relatively neutral. I accurately report on the letter and express an appropriate level of skepticism.

[…] and had been using the same tactics, and facing the same criticism there as in the US, including a letter signed by authors, an antitrust complaint filed by a book industry trade group, and a possible investigation from EU […]