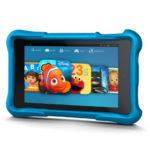 With Kindle Freetime, Kindle Freetime Unlimited, and an investment in an ed tech startup, Amazon has long shown an interest in the footie pajama customer base. On Wednesday they targeted those customers with a new kid’s tablet option.

This tablet has the exact same hardware as the HD 6 and HD 7, only with a few additional features. It costs $50 more than the cheapest ad-subsidized models, and in exchange for that extra cost Amazon will sell you a tablet with a thick rubber shell, a one year subscription to Kindle FreeTime Unlimited, and a two-year "we double dog dare you to break it" warranty. 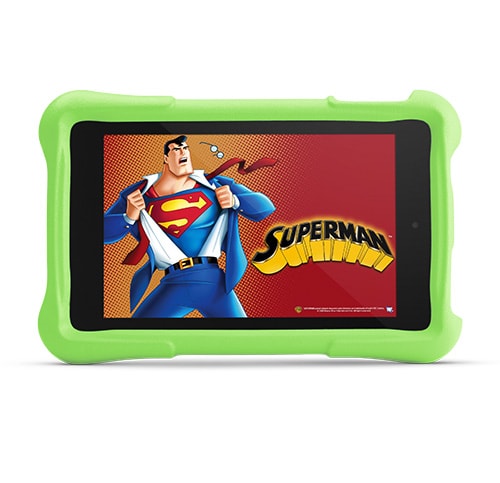 Amazon is not the first to release a tablet built just for kids; this market has been around for at least 4 years now. But Amazon has launched a  tablet which could dominate this market.

If I had a kid and were planning to get them a Kindle Fire, I would go for this one. Between the cost of the warranty, the year’s subscription (which usually costs up to $60 itself), and the rubber shell, Amazon is offering a killer deal here. The warranty along justifies the price; SquareTrade is asking $50 on Ebay for a two-year warranty for a $100 to $150 tablet, and that is a more limited warranty.

But not everyone wants to get their kid a game and media tablet like the Kindle Fire, so it’s not perfect for everyone. If I were looking for a more academically focused tablet, I would not buy this one. Instead I would look at what Fuhu had released lately, and see what names are mentioned as competitors.

Even so, I expect Amazon is going to sell bunches of the Kindle Fire HD Kids Edition.

[…] new Kindle Fire HD Kids Edition tablet is going to be getting a lot of press over the next few weeks, but it’s not the […]

[…] Obviously, if you want an Apple device or want a 9 inch screen, you will probably have to pay more. This week Nate recommended the new $150 Kindle Fire HD Kids Edition tablet. […]

My children just got one for Christmas from their grandparents (I had been the careless one and lost our HD7 in November). I’m happy for them to have a tablet again, but for a content snob like me, the FreeTime Unlimited is kind of a blessing and a curse. There are some great offerings mixed in with a lot of nonsense. I call it brain candy. I’m not at all concerned that they’ll run across something questionable with FreeTime Unlimited, however. In that regard, the subscription feels safe. And I also have to say I greatly appreciate the Kindle FreeTime app. I also like that on this version of the Fire, the kids can switch freely between their FreeTime profiles without me needing to enter a password.

Regardless, I’m still undecided about whether we’ll keep the 1-year free subscription. I really would like to be able to cull the offerings within each category (books, apps, and movies). I don’t have that option and find it mildly irritating. I may simply use it for ideas for future purchased content.

[…] a 2-year warranty, rubber shell, and parental controls, the Fire HD Kids Edition tablet has been one of the better values in kids tablets ever since it launched in September […]