Amazon launched a new Spanish language Kindle Store today (for the US and international markets) and once again they have dominated a market just by entering it.

The press release mentions Amazon having over 30 thousand titles in this new ebookstore; going by Amazon’s own index count it’s actually closer to 33 thousand. That’s a lot more than the 22,000 titles Amazon had in the local Kindle Store in Spain when it launched late last year.

It’s also far less than the 45 thousand Spanish language titles that B&N looks to be selling in the Nook Store.

The store is also featuring 14 Spanish language newspapers as well as exclusive content and both original and translated works, including Dora the Explorer and Go Diego Go books in Spanish, Kindle Singles by authors such as Kurt Vonnegut and Susan Orlean, and popular English-language books translated into Spanish, such as The Hunger Games series and the Twilight series.

TBH, this isn’t a launch so much as it’s a reorganization. Amazon has been selling Spanish language ebooks for years now, and they have even been sorting them by language for all that time. So what Amazon really did here was to add new pages that made it easier for you to find and buy the ebooks.

Of course, that’s no small thing. It helps Amazon catch up with B&N, who has had Spanish pages in the Nook Store since last spring. It also gives us a hint about Amazon’s future plans. A few months back I predicted that Amazon will launch a bunch of local Kindle Stores in Latin America in the near future. I would say that today’s news shows that Amazon is clearly working in that direction.

On a related note, while looking through the Kindle Store I noticed one detail that Amazon hasn’t pointed out. The press release mentions 14 Spanish language newspapers from SA, but it turns out that Amazon also offers subscriptions to 7 newspapers from Brazil. They’re likely Portuguese, not Spanish, so they’re not that relevant to today’s story, but I find it telling nonetheless that Amazon has recruited them. 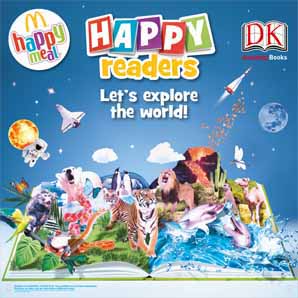 McDonald’s to Start Giving Away Interactive eBooks in November

[…] Here’s an interesting footnote to Amazon’s new Spanish language Kindle store.The ebook market is growing  by leaps and bounds in the US and UK, that much we know. But today I […]

[…] Late last week Amazon announced a Spanish language Kindle Store for the US and world market. Neat story, and I followed it up that with a short post about the 25% […]

[…] noticed something about the Nook Store a few weeks back while I was working on the story about the US Spanish Kindle Store. All the attention at the time was focused on Amazon, but what few had noticed was that B&N had […]