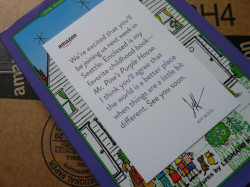 Amazon is widely expected to launch a smartphone at an event in Seattle next Wednesday, but given what they’ve sent to invitees I am not so sure.

TechCrunch and other blogs are reporting that Amazon sent them a copy of Mr Pine’s Purple House (Amazon). It’s described as Jeff Bezo’s favorite book when he was a child, and each copy includes this personal note from Bezos which says:

We’re excited that you’ll be joining us next week in Seattle. Enclosed is my favorite childhood book – Mr Pine’s Purple House. I think you’ll agree that the world is a better place when things are a little bit different.

I have no clue what that is supposed to mean, and yes that is driving me nuts. 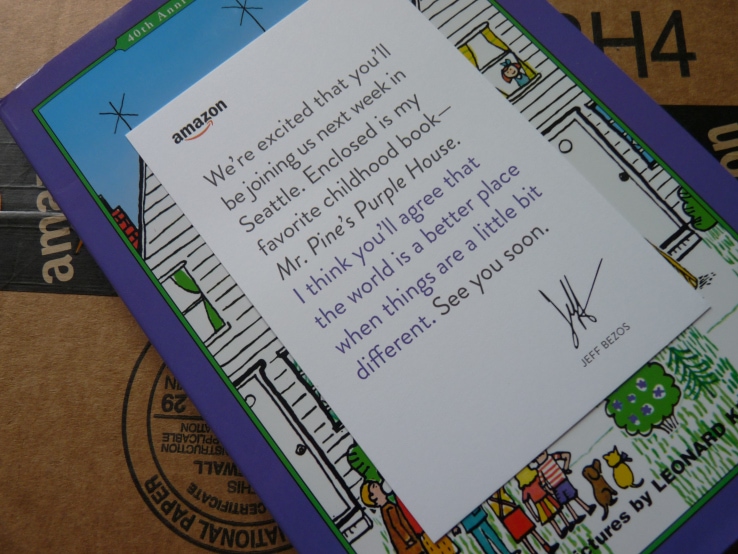 While I don’t know what this means, I have a sneaking suspicion that I may have been wrong to write off that TechCrunch rumor about a new Kindle Paperwhite.

All the recent leaks, as well as the teaser video Amazon posted to Youtube, are pointing to Amazon releasing a smartphone next week, but I don’t see how a book fits into that. It would make far more sense for this book to suggest that Amazon will reveal a reading device next week.

On the other hand, this could simply be another well-executed publicity gimmick from Amazon. The whole goal might have been just to get everyone writing about Amazon, in which case mission accomplished.

Would anyone care to speculate?

I do at least hope that not just a phone will be presented. Regarding the rumored Ice Wine device, my hope was that it might be a larger-than-6-inch reading device. That children’s book, depending on its content, which I know nothing about (is it a comic book or a plain text book?), might also allude to a device with a colour display. Or a rugged device. Both cases though would also suggest an expensive device, which I don’t see people buying for children then. We shall learn about it soon enough.

Color E-ink is a dead end.

Liquavista is not secretly in production, is it? 😉
It’s a phone.
Just a slightly different one.

I think that would have turned up in one of the rumors.

Yes, but where’s the fun if everyone speculates the same thing?

I’m wondering whether there will be a device designed for children (in the Leap Frog type of area), that can integrate with other Amazon products like FireTV. Imagine reading a picture book to your kids and have the pages be displayed on the large screen TV. Or for less attentive parents, the books can be automatically read by the device.

From Amazon’s description of the book:
"Mr. Pine lived on Vine Street in a little white house." That’s all fine and dandy, but there are 50 white houses on Vine Street, all in a line, and Mr. Pine can’t tell which one is his! To distinguish his own abode, he decides to plant a little pine tree in front, but his neighbors like that idea so much, they do it, too. Even when he plants a bush next to his tree, everyone follows suit. Finally, Mr. Pine paints his house purple–and to his delight, no one else wants a purple house. His neighbors are inspired, however, to paint their own houses all different colors, their first break with conformity. ("'Yellow for me,' said Mrs. Green. 'Green for me,' said Mrs. Brown.") "

I think everyone making phones that all look alike is the pine tree and the purple house is a 3D phone.

That is what I was going to say.

Perhaps Amazon is releasing more than one new device? They’ve done it before.

For what it’s worth, I want a Paperwhite with page turn buttons, but I am not holding my breath, LOL!

Obviously there is going to be a purple 12″ 3D phone. This satisfies all the rumors (including usability as an ebook reader), and really would be "a little bit different".

The Amazon description of the book reads "Mr. Pine lived on Vine Street in a little white house. "A white house is fine," said Mr. Pine, "but there are FIFTY white houses all in a line on Vine Street. How can I tell which house is mine?"
It sounds like a color Kindle to me.

So we have a book and we have talk of color. But the have kindle fires for color. It would have to be new screen tech to make sense of the clues.

And maybe just no one is excited about another phone and this is how they get us buzzing again. I really hope its something besides another phone lol.

In the past Amazon has introduced more than one product at a time when Mr. Beyzos made the presentation. Perhaps there will be new Kindles as well as something like a phone, a tablet computer or something else that uses the same interactive technologies the developers they encouraged to attend will bring. Something Amazon’s ecosystem is lacking is a medium for educational reading. Their firmware supports footnotes better than anyone but they need a bit larger screen with higher density to use it fully, and neither Amazon nor any other has a good reader for younger kids. Well, maybe; at least I hope to see something like that.

Except for last Fall, when Amazon introduced the Kindle Fire HDX. But that could be argued as being three products which were launched alongside a new OS, a bunchaton of new features, and more.

I don’t expect it to be a massive hit. Their track record with hardware other than e-ink readers is pretty poor. The Fire range was supposed to be an iPad killer, but tuned out to be something that only sold to die-hard Amazon-ers initially and then many others bought when they kept slashing the prices. But the stats show nobody uses them for tablet stuff (web browsing, email etc). http://i-cdn.phonearena.com/images/articles/83047-image/ipad-use-share.jpg (that’s from 2013 but it’s barely changed since)
I think some people use them as heavy, over-bright ereaders and many others just keep them in a drawer.

Also, 3D??? The technology that the TV industry gave up on because people don’t like it. I know this is a a bit different in that it’s for interface design, but my guess is it will be gimmicky and people will get tired of it.